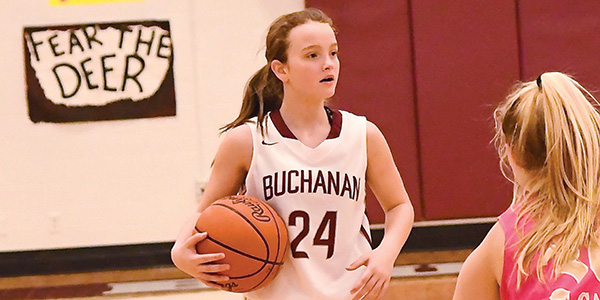 The Bucks headed to Berrien Springs to take on Andrews Academy. Buchanan outscored Andrews 17-5 in the second quarter to turn a close game into a 47-31 non-conference victory.

“For the first game of the season, as a young team, I think it was nice to get the season under way as we definitely had to overcome some first-quarter jitters,” Miller said. “Our girls did a nice job of competing and moving the ball around to find some quality shots. There are some issues we need to correct before Friday regarding our effort on defense, but I am confident this group of girls are willing to be coached and get better.”

Buchanan (1-0) used its height advantage, especially inside with Faith Carson, to slowly pull away from Andrews in the final three quarters. Carson finished with 17 points and 12 rebounds in her first varsity game to lead the Bucks, who also got 10 points from Claire Lietz off the bench. Lietz also had six rebounds and a steal.

Buchanan will take a step up in competition in its next game on Friday night as it hosts BCS Athletic Conference Red Division foe Bridgman. Tipoff is slated for 6 p.m.