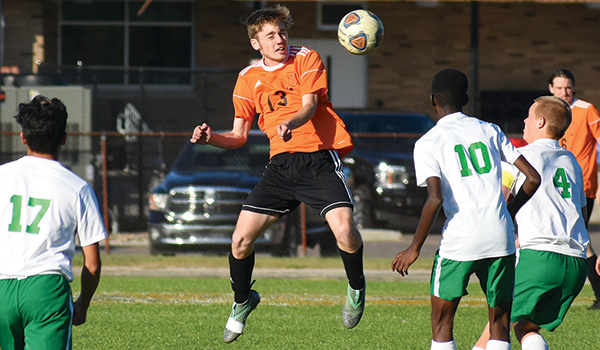 Seniors on the verge of three-peat

DOWAGIAC — For the first 22 minutes, the Dowagiac soccer team did exactly what it needed to do in its Division 3 district semifinal match against visiting Berrien Springs Monday.

For the final 18 minutes of the opening half and then the first 10 minutes of the second half, the Chieftains fell back into their routine of playing kickball and chasing their opponents.

As a result, the Shamrocks scored to cut the lead to 2-1.

Dowagiac was able to regain the form that has led to plenty of success this season, and went on to defeat Berrien Springs 3-1 and earn a spot in the district championship game tonight at Coloma against South Haven.

The Rams were a 2-1 winner over the Comets Monday night.

“We lost our composer and stopped moving the ball,” said Dowagiac coach Mike Williams. “Communication was an issue. Jose [Carillo] does his job. You can hear him. It is the others who are not communicating as much as they need to.”

Dowagiac will need to clean up both of those things if they want to win their third consecutive district championship against the Rams.

Wilson and McCrorey got the Chieftains off to the quick start. Wilson scored less than three minutes into the match, while McCrorey found the back of the 19 with 18 minutes left in the opening half.

The Shamrocks came out at the start of the final 40 minutes of play and applied the pressure on the Chieftains. The swarming Shamrocks finally were able to get the ball past Dowagiac goalkeeper Alejandro Martinez as Michael Silva scored in the 50th minute to cut the Chieftains’ advantage to 2-1.

The score remained that way until Noah Green sealed the victory with a goal late in the second half.

Dowagiac and Berrien Springs both finished with seven shots on goal. Hunter Zammataro had four saves for the Shamrocks, while Martinez stopped six shots for the Chieftains.

Berrien Springs completes one of the school’s most successful seasons with a 13-8-1 record. The Shamrocks were the BCS Athletic Conference champions.