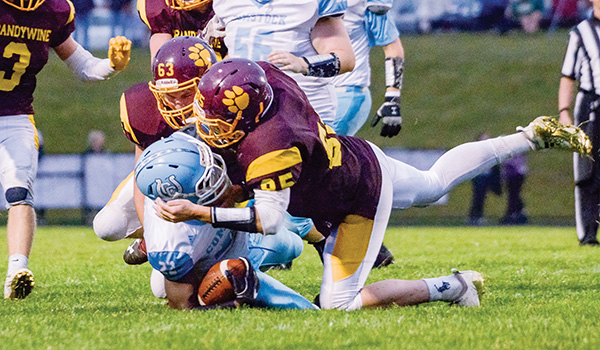 NILES — Following its first win over Coloma since 2011 last week, Brandywine’s offense picked up where it left off against visiting Comstock at Selge Field on Friday night.

Behind the stellar play of quarterback Gabe Gouin, the Bobcats (2-0) dominated every facet of the game and pummeled the Colts (0-2) by the score of 68-0.

The Bobcats’ Jordan Abrams added 53 yards to his growing rushing record on Brandywine’s first series and had the first score of the game.

Comstock moved the ball using its spread offense to the Bobcats’ 30-yard line, but turned the ball over on downs.

A 50-yard rushing touchdown by Gouin would be the first of six on the night for the junior quarterback.

“The credit goes to my teammates for my success tonight,” Gouin said. “The offensive line opened the holes, and our backs were making plays out there. Our defense was outstanding as well.”

Gouin would connect with seniors Jaelen Briggs, Shane Brown and Abrams on touchdown passes of 52, 5 and 73 yards respectively in the first quarter.

With Brandywine leading 34-0 heading into the second quarter, Gouin still was not done.

Brandywine led 47-0 at halftime with the MHSAA mercy rule in effect for the second half.

Gouin ended 4-for-5 with 145 yards and four touchdowns, and six rushes for 82 yards and a pair of touchdowns.

“[Gouin] had a great night,” said Brandywine coach Mike Nate. “He is a solid ball player and getting better every day. Gabe has that leadership on the field that comes with his dual-threat ability.”

Abrams added his second rushing touchdown in the third quarter from 70 yards out.

Briggs had a 51-yard rushing touchdown as well in the third quarter.

Steven Kendall finished the Bobcats’ scoring on a 10-yard rushing touchdown in the fourth quarter. The Brandywine offense finished the night with 516 yards compared to the Colts’ 91 yards.

The Bobcats’ defense kept the goose egg on the board behind two fumble recoveries and holding Comstock’s rushing attack to negative 42 yards rushing.

“A dominating performance all around tonight,” Nate said. “I thought this would be a much closer game.

“A lot of kids contributed, and everyone had fun tonight. It was a great team effort, but we have an excellent opponent in Saugatuck next Friday at home.”

Brandywine will be looking to be 3-0 for this first time since 2014 when they defeated Bridgman, LaPorte La Lumiere and Centreville to start that season.