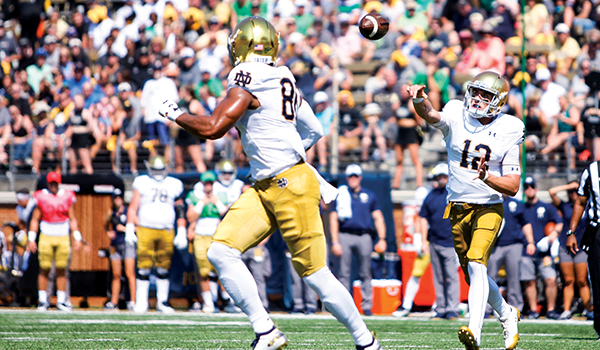 The No. 7-ranked Michigan Wolverines are coming off an embarrassing loss to Ohio State and will be looking for redemption against No. 10-ranked Florida.

This will be the third meeting with the Gators under Jim Harbaugh.  Michigan has won the previous two meetings.

No.  3-ranked Notre Dame is playing in its eighth Cotton Bowl, but its first college Football Playoff semifinals.

Notre Dame faces a No. 2-ranked Clemson team that is playing in its third straight national semifinal. The winner advances to face Alabama or Oklahoma.

Top-ranked Alabama has played in all five College Football Playoff semifinals and has won two out of its three national title game appearances.

Oklahoma has Heisman Trophy winner in Kyler Murry and the No. 4-ranked Sooners are hoping to play spoilers.

No. 8-ranked UCF is undefeated for the second straight season. But if they want to be taken seriously, it must figure out a way to beat the  No. 11-ranked LSU Tigers in the dessert.

UCF must play this game without standout quarterback McKenzie Milton who is injured.

No.  6-ranked Ohio State will be looking to take out its frustrations on No. 9-ranked Washington after once again being left out of the College Football Playoffs final four.

It will be the final game for Buckeyes coach Urban Myer, who has announced his retirement.

No. 5 Georgia is also stinging from being left out of the College Football Playoffs.

The Bulldogs face No. 15 Texas, which is looking to return to the top of the college football mountain after spending the past few years floundering in mediocrity.