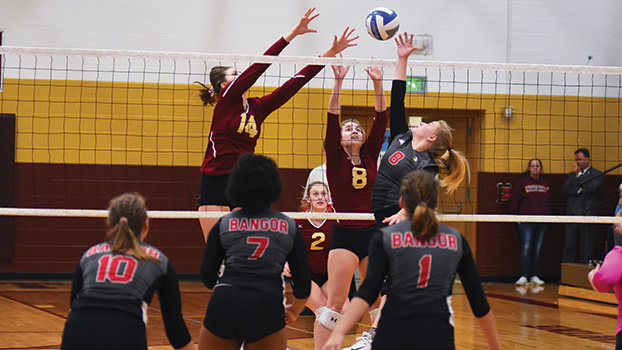 NILES — The beat goes on for the Brandywine volleyball team in its quest for back-to-back district championships.

The Bobcats (44-5) moved a step closer to a second championship with an easy 3-0 victory over visiting Bangor in the Bobcat Den Wednesday night.

Brandywine swept the Vikings 25-8, 25-14 and 25-7 in less than an hour to advance to Thursday night’s Division 3 district championship match against BCS Athletic Conference rival Bridgman, which defeated Eau Claire 3-0 in the second semifinal on Wednesday.

Senior setter Audrey Longley, who has played through the pain of a back injury sustained in the Bobcats’ final regular season home match, said she is getting close to being completely healthy.

“I am 98 percent there,” she said. “There are still certain things that I do that hurt. She is saving my serve just so I can be better for regionals. I am basically ready to go.”

Longley said that the team is focusing on reaching its goal of winning a second straight championship.

“Even after all the things that we have gone through, for us to come this far and do this good is just fantastic,” she said. “I think (interim coach) Sara (Dye-Hunt) really helped us get mentally prepared to deal with all this adversity.”

Bridgman is no stranger to the Bobcats, who are undefeated against the Bees this season.

Longley said that there will be no letdown in preparation for the championship match.

“We focus on the thing we did really well in the games we won against them,” she said. “We make sure on the holes in their defense and make sure that we understand what they do so we can progress and do all the right things.”

Dye-Hunt will be looking for more intensity than she saw from the team early on against Bangor.

“We try to let them have fun and do what they have to do during the day,” she said. “We give little things to keep them inspired. But game time, they have to come out ready to play. They cannot come out the way they did tonight.”

Dye-Hunt said that playing back-to-back nights is a plus for this veteran team.

“This team has seen so much volleyball and had so many touches that they can do that (play back-to-back). They can mentally refocus and the know when they have to pick it back up.

The Bobcats’ front line continued to dominate its opponents with a combined 22 kills from Bethany Duval, Kylie Myers and Nicole Sachman. Myers also had a team-high five blocks.

Defensively, Duval and Sachman led the way with 11 and 10 digs, while Megan Schmidt, who returned to the lineup after missing Monday night’s match with an elbow injury, finished with nine digs.

Longley finished with 22 assists, three digs and a pair of kills.

Ali McClaran had 12 kills and 22 digs for the Bucks, who also got five kills and 16 digs from Katie Schau. Megan Adkerson added four kills and 14 digs. Schau also had 24 assists.