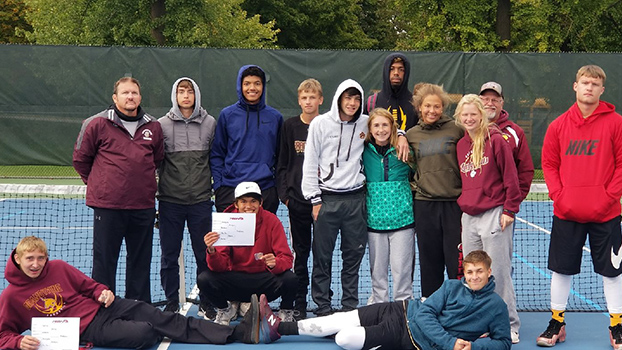 The Brandywine tennis team finished third at the Division 4 regional to qualify for this weekend’s state finals. (Leader photo/Submitted)

NILES — There will be 26 teams vying to be the Division 4 state tennis champion when the tournament gets under way Friday morning at Kalamazoo College and Western Michigan University.

Brandywine will be one of those 26 teams.

The Bobcats finished third at last Thursday’s regional at Berrien Springs to earn the right to compete in the state finals.

Opening round pairings were announced Tuesday afternoon and veteran Brandywine coach David Sidenbender knows that those pairings are extremely important to the Bobcats’ chances to place high at the state finals.

“Draws are the most important thing,” he said. “Then it is just playing at the level we have been the past few weeks. We have been playing great at all flights. It is also about not being overwhelmed by the situation.”

Brandywine is only one of three Class C schools to qualify for the state finals.

“The vast majority of the teams who make it are Class B or private,” Sidenbender said. “Our population is 352 and we have to play schools like Paw Paw (670) just to get to state and teams like Allegan (667) and Whitehall (669) when we get there. Add that to the private schools like Grosse Pointe Universtity Liggett and Ann Arbor-Greenhills and others who have won every championship for the past 20 years except one (Buchanan 2003). So, history is not on our side, but we welcome the challenge.”