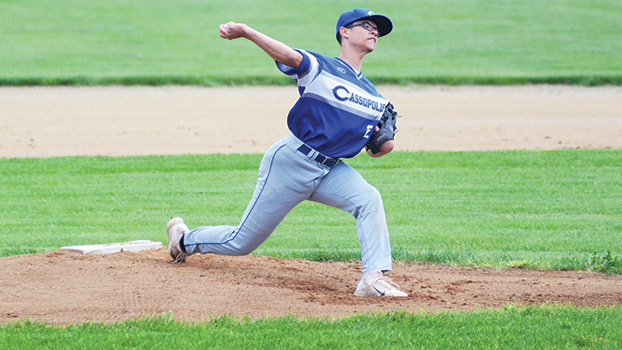 The Rangers won the opening game 2-1 behind the pitching of Xander Smith, but dropped the nightcap to the Bulldogs 3-2.

Smith went the distance, scattering seven hits and allowing one run with a pair of strikeouts.

Cassopolis finished with three hits against Alex Meyer, who struck out 10 for Centreville.

Smith, Mason Polomcak and Dylan Green all singled for the Rangers, with Green driving in both runs in the fifth inning after the Bulldogs had taken a 1-0 lead in the top-half of the inning.

Centreville scored all three of its runs in the sixth-inning of the nightcap to pull out the victory.

Green went the distance for the Rangers, allowing three runs on seven hits with six strikeouts.

Cassopolis was held to two hits, both singles, by a trio of Bulldog pitchers.

Green and Hunter Parsons had the two hits for Cassopolis with Parsons driving in the run.

Cassopolis swept a pair of Southwest 10 Conference games from Marcellus May 18.

The Rangers won the opening game 4-2 and then blanked the Wildcats in the nightcap 10-0.

Smith tossed a four-hitter with five strikeouts in the first game.

In the second game, Green allowed three hits and struck out six.

DOWAGIAC — Not all area athletic directors are confident that the new transfer rule adopted by the Michigan High School... read more