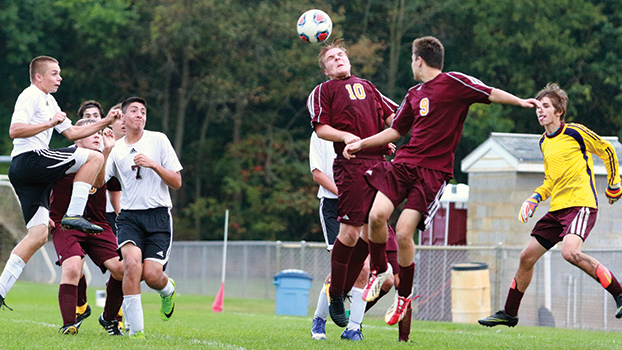 BUCHANAN — Host Buchanan let a 3-1 halftime lead slip away and had to settle for a 3-3 BCS Athletic Conference Red Division tie with arch rival Brandywine Wednesday.

The two squads both got on the board early as a goal by Lane Herrman for the Bucks and Dominic Cherry for the Bobcats had the score knotted at 1-1 for most of the first half.

Back-to-back goals from Evan Nowak and Brendan Dodson gave the Bucks a 3-1 lead at the intermission.

The Bobcats came out of the break as the aggressor in the second half led by Bryce Taberski and Gaige Ernsberger.

Taberski would find the back of the net twice for the Bobcats tying the game 3-3.

Ernsberger led the charge on several occasions for Brandywine, but couldn’t manage to get a shot by Buchanan keeper Ethan Tews.