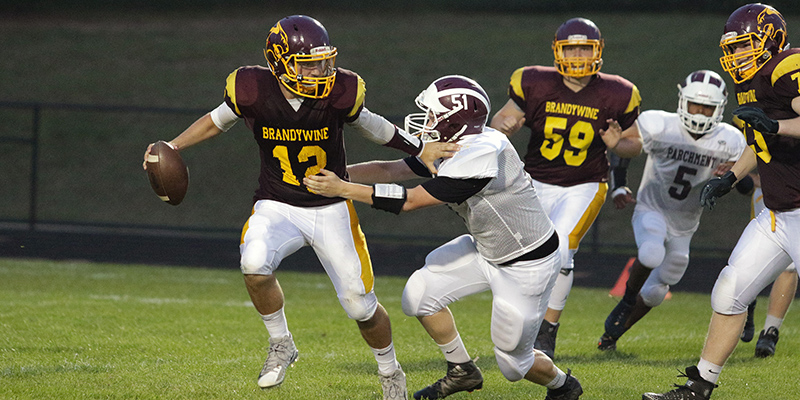 NILES — While the Brandywine offense was busy racking up more than 300 yards of total offense and 22 points, the defense couldn’t find an answer for Parchment’s Wing-T offense Thursday night.

The Panthers rolled up 412 yards of total offense, including 392 on the ground, in a dominating 46-22 BCS Athletic Conference non-divisional victory over the Bobcats.

Both teams are now 1-1 on the young season.

“We got outhit and they just put it to us,” Brandywine coach Mike Nate said. “We did not see their punt team  all night. They were probably at least 4 for 4 on fourth downs or maybe even 5 for 5.”

Nate said that the defense did provide a scoring opportunity early in the game, but his team was unable to capitalize on it.

“They fumbled and then we fumbled it right back to them,” he said. “We had the right play called, but we fumbled the pitch. We probably would have scored. That was a key play I thought.”

The Bobcats scored quickly as quarterback Corbin Eckenberger connected with Shane Brown for a 68-yard touchdown pass and catch just two plays into the game.

Parchment responded twice in the first quarter, taking a 16-8 lead.

After two second-quarter scores gave the Panthers a 30-8 lead, the Bobcats connected on another long touchdown pass, once again from Eckenberger to Brown, this time for 40 yards. cutting the lead to 30-16 at the intermission.

Parchment tacked on two touchdowns in the third quarter, jumping out to a 46-16, lead before the Bobcats punched it in one more time on a short run by Eckenberger.

Eckenberger finished 4 of 8 for 142 yards and a pair of touchdowns.

Brown hauled in three of those passes for 140 yards.

Conner Janowiak led the team in rushing with 62 yards on three attempts.

“I thought Brock Prenkert and Conner Janowiak, our outside linebackers, they played well,” Nate said. “Those guys did a great job.” 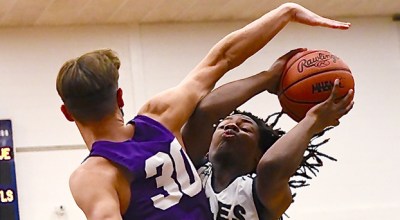