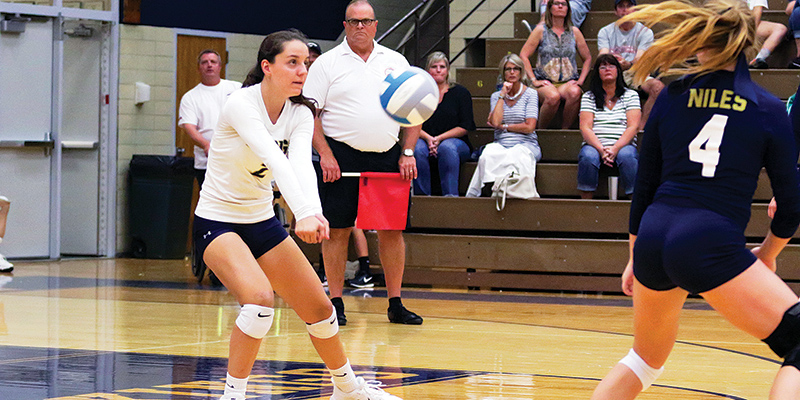 Niles’ Briana Pickens stepped into a new role as the libero for the Vikings in their 3-0 victory over Gull Lake. (Leader photo/AMELIO RODRIGUEZ)

“We called a timeout and talked about chemistry and practice, and how no matter who is on the court, you have to trust them,” Nate said. “Our team is solid. Physically they are there and can beat anybody. Mentally they have to remind themselves of that, and they have to believe, and finish.”

Niles went deep into the bench playing as many as 11 players on the night.

“The chemistry was a little different because we had two and three girls in there that aren’t usually in the same rotation,” Nate said. “That shouldn’t matter for us, that’s why we practice and why we are a team. They just needed to believe, and finish. Once they did that and got some points, I knew we were going to make it all night.”

The second set tested the Vikings’ new-found belief in each other as they watched a 20-15 lead vanish into a 22-21 deficit before rallying back with the final four points of the set to win 25-22.

The third set was similar to the second in that the Vikings would build leads of 5-0, 13-9 and 17-13 only to watch those leads vanish in each case.

“It’s mental. I think for us, in order to win we have to be having fun out there,” Nate said. “Sometimes I just have to tell them to take a breath and have fun.”

One of the rotational differences the Vikings had to adjust to on Wednesday was sophomore Bianca Pickens playing the libero position instead of senior Breannan Love. The change was a coach’s decision, and one the whole team rallied behind.

“As a team, no matter what’s going on, whether it’s injuries, personal issues or anything else we rally around each other,” Nate said. “Bianca was absolutely stellar tonight. She’s a leader, always a hard worker and her attitude is amazing.”

While seniors led the way in the statistical categories, behind Carly Barton’s 30 assists, and Bella Rasler’s 16 kills and 15 digs, it was the play of some underclassmen that really stood out.

The victory improves Niles to 9-3 on the season and it is now off until Wednesday when the Vikings will travel to Kalamazoo Central for another conference match.