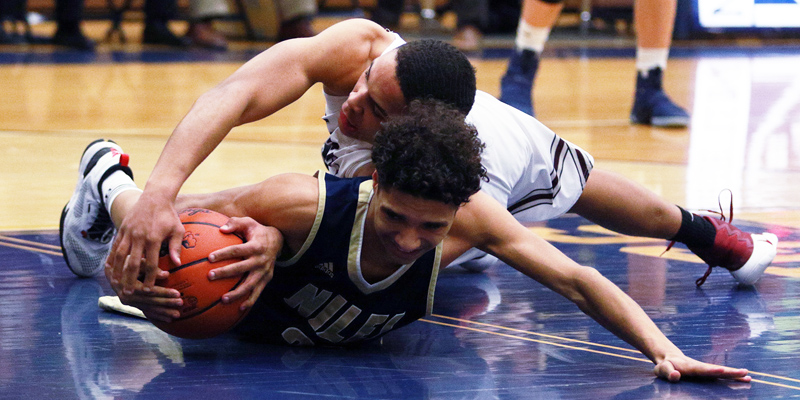 Niles’ Tre Gray gets tied up with a Kalamazoo Central player for a tie ball in the Class A district semifinals Wednesday night. (Leader photo/AMELIO RODRIGUEZ)

The Niles basketball team knew exactly how big the task was in front of it as the Vikings took on No. 8-ranked Kalamazoo Central in the Class A district semifinals Wednesday night — literally.

The Maroon Giants are apply named as nine players on the Kalamazoo Central roster are 6-foot-3 or taller, including Isaiah Livers, who 6-8.

Niles was unable to match up physically with the Maroon Giants and as a result, Kalamazoo Central cruised into the championship game tonight with a 71-37 victory over the Vikings.

“You don’t realize how big Central is until you stand next to them,” Pawielski said. “Not only are they long and athletic, but they know where the weight room is. Our kids didn’t give them enough credit for how fast they are, either.”

Any thoughts Niles may have had of pulling one of the biggest upsets in the entire state Wednesday night went out the window pretty quickly as Kalamazoo Central raced out to a 23-5 lead after the opening quarter.

Niles (6-16) managed to hold the Maroon Giants to just 13 points in the second quarter, but still trailed 36-13 at halftime.

A 20-point third quarter allowed Kalamazoo Central to seal the deal as it heading into the final eight minutes with a 56-29 advantage.

Livers led all scores with 19 points, while Rog Stein added 12.

Niles was led by Bryce Lake and Alex Harpenau, who scored nine points each.

“This was a nice group of seniors,” Pawielski said. “We will miss them. We have good guards coming back, but not a lot of size. Hopefully, we can have a good summer like we’ve had in the past.’’