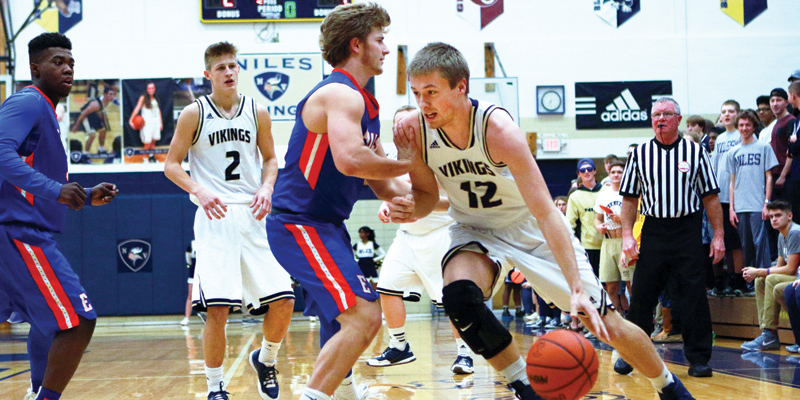 Niles senior Alex Harpenau (12) is fouled by Edwardsburg’s Chase Tarwacki as he tries to drive to the basket Monday night. (Leader photo/AMELIO RODRIGUEZ)

In a physical game that featured five technical fouls, the Vikings (4-13) were able to send their senior class out on a good note according to Niles coach Todd Pawielski.

Overall the game itself was not pretty for either team, as it was filled with a combined 39 fouls and several missed layups by both teams.

“I was disappointed that we lost our composure on a number of occasion instead of just playing the game,” Pawielski said.

“You have two competitive teams that both want to win,” said Edwardsburg coach Steve Wright. “But that doesn’t excuse some of the loss of concentration, they’re kids and we’re working on it.”

The Eddies (5-12) came in to the game missing two of their senior athletes, Cameron Ekanayake and Adam Kozinski, both are out with significant injuries.

Konzinski is recovering from an ankle injury, while Ekanayake has surgery last week to repair a leg injury.

“Credit Coach Wright’s team for coming in here shorthanded and doing a lot of good things,” Pawielski said about the Eddies. “We certainly did not stop Edwardsburg, they got every shot that they wanted, they just missed some shots.”

Niles found a spark offensively from the long range shooting of senior Bryce Lake, who connected on six 3-point baskets on his way to a game-high 20 points. Robert Brown was the only other Viking in double digits as he knocked in ten points.

“Congratulations to Niles, they outmuscled us and they beat us,” Wright said.

Jack Knoll with 12 points and Kev’on Taylor with five led the Eddies.

“I thought all the kids played hard,” Wright said. “All of our young guys played hard and deserved to be on the floor,” he added about a couple of his senior starters not playing as much in the second half.

“Coach Wright is a class act all the way. Whatever decisions he makes are the right ones. Edwardsburg is lucky to have him as their coach,” Pawielski said.