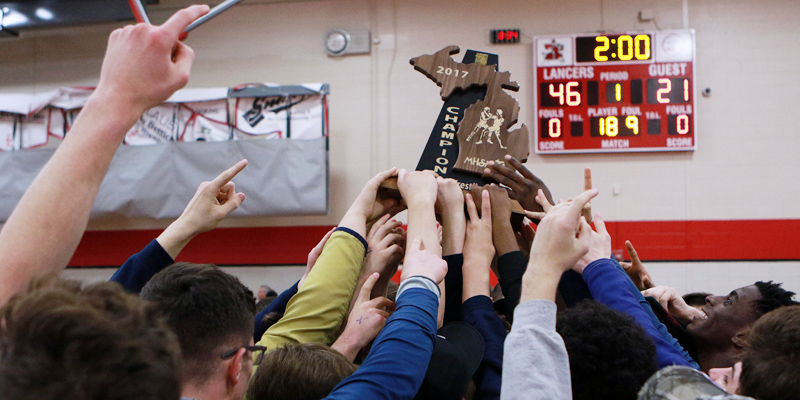 STEVENSVILLE — For the fourth time in the last five years, the Niles wrestling team is headed to the Division 2 state quarterfinals.

The No. 4-ranked Vikings steamrolled Mattawan and Coldwater at Lakeshore High School Wednesday night to advance to the state finals in Mt. Pleasant at Central Michigan University’s McGuirk Arena Feb. 24.

Niles (16-1) blew out Mattawan 51-19 in the semifinals, forfeiting the last two bouts of the match.

Coldwater proved to be no match for the Vikings either as they crushed the Cardinals 46-21.

How dominant were the Vikings, who will find out where they are seeded for the state tournament Sunday night?

Niles won 20 out of the 26 matches with 12 pins and two technical falls.

Stephenson and Flick were both 2-0 on the night, while Findeisen wrestled only in the championship match, as did Hall, who has been sick.

“I feel pretty bad,” Hall said following the match. “This morning I think I had a 101 degree temperature. But you just push through it. I felt awful. I pretty much do what I can and see what comes of it.”

Findeisen and Stephenson said the team expected to be heading to Mt. Pleasant next week.

“I honestly expected us to dominate tonight,” Findeisen said. “It feels good to finally be back on track where we are supposed to be. There were a few matches that I did not think they would go exactly that way, but I am proud of my team and I am glad of what they did tonight.”

“I’m not surprised,” Stephenson said. “We saw the matchups last Saturday at the individual districts and felt good about today. But it feels great going to state. Last Wednesday beating Lakeshore in the district was the key to my life right there. And coming out today was a great feeling, with all the hard work we’ve put in over the last year.”

Veteran Vikings’ coach Todd Hesson said it was a relief to get through the regional and get back to the finals.

“I’m very happy,” he said. “Our kids have done a great job and you know the credit goes to them. Even like last week when we moved kids to other weight classes. They cut the weight. They had to go out and do the wrestling. I do not care whether our kids have been with us for four weeks or four years, they have done everything we have asked.

“Brenden Hall was sick all day and all last night. He came out and wrestled the one match we needed him to. We saved him for one match and we hoped he got through it.”

Hesson was also excited about the support his team is getting once again.

“We have had great fan support, Hesson said. “The fact that we have all of our faculty, staff and administration here is great. We had a pep assembly today, so it has been a nice ride.”

Niles will now turn its attention to the Division 2 individual regional tournament at Eaton Rapids Saturday before finding out who its quarterfinal opponent will be on Sunday.