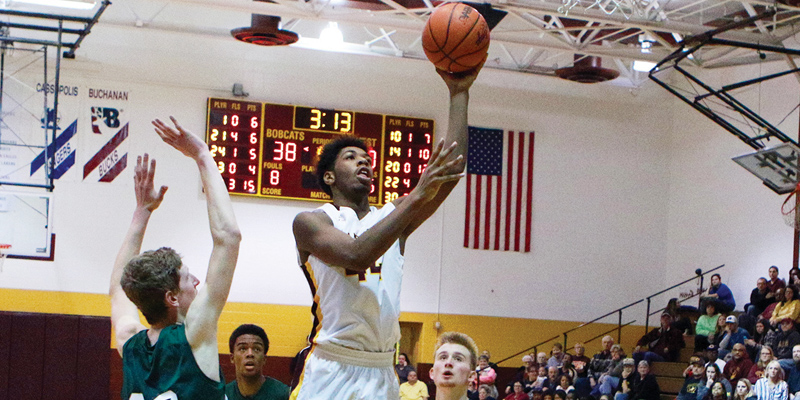 The ninth-ranked Brandywine boys basketball team has been having quite the season so far.

Off to the school’s best start for any varsity team at 15-0 heading in to Friday night’s matchup with visiting Berrien Springs, the Bobcats knew they were going to be in for a fight.

The Bobcats had to overcome a poor shooting night, the Shamrocks defense and overtime to ultimately pull out a 48-40 victory to remain unbeaten and clinch the BCS Athletic Conference Red Division championship.

Brandywine connected on only 19-of-60 shots for 32 percent.

The Bobcats, normally a team that can fill the basket from long range, had to change their game plan on Friday to more of a pound it inside style because their outside shots just were not falling. Brandywine connected on only 2-of-18 shots from behind the arc.

Sophomore Jaden Croom ended up being the centerpiece of Brandywine’s new game plan as he dropped in a game high 18 points, 14 of those coming after the intermission.

“It doesn’t matter who’s on or off, someone’s always going to step up,” said Brandywine coach Nathan Knapp. “Jaden was there and if Jaden’s not there we will keep searching until we find someone. That’s just the way we are and the luxury we’ve had so far this year.”

It was clear after the break that Brandywine was determined to pound the ball inside in the second half offensively and continue to hound the Shamrocks defensively.

The Bobcats forced Berrien Springs in to 20 turnovers.

“We take pride in our defense and that’s what has gotten us to where we are this year (16-0),” Knapp said. “We are getting better at stopping penetration, and helping. We like to trap and scramble and we rotate well out if that and that’s how we get key turnovers.”

In addition to leading all players in scoring, Croom also pulled down eight rebounds. Hunter Slaughter and Vinny Peel each grabbed eight boards as well, while also knocking in nine and eight points respectively.

“He’s unstoppable,” Knapp said about Croom. “He’s got a strong will in the paint. He’s catching the ball better, and he has great touch around the rim. He’s going to be a dominant player when he puts it all together.”

Scott Miller contributed seven points including the go ahead basket in overtime, off an offensive rebound, a lead of which Brandywine would never let go.