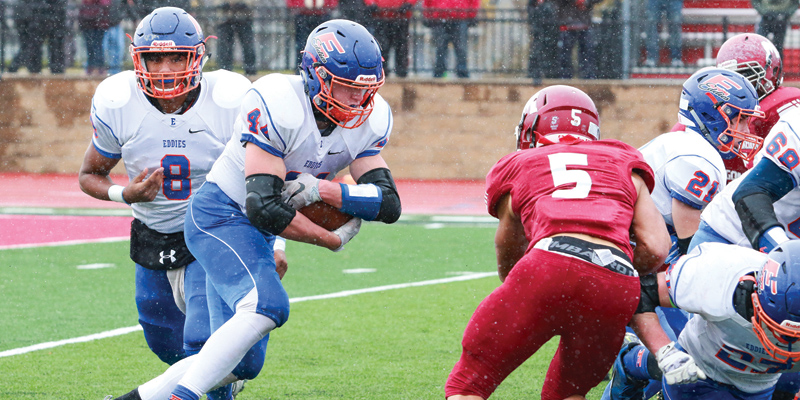 KENTWOOD — The Division 3 semifinal game at East Kentwood high school on Saturday pitted No. 1 Muskegon against No. 2 Edwardsburg for the right to advance to Ford Field in Detroit Saturday night.

While Mother Nature brought along freezing temperatures, strong winds and snow, it was the two defenses that proved to be the toughest “elements” with which to deal.

“Offenses are good and great but defenses win championships,” said Muskegon head coach Shane Fairfield. “They have (Edwardsburg) a very explosive offense. They might not look like much because they don’t have the flash and dance, but they are very good at what they do.”

While both offenses are normally high-powered and high scoring, averaging more than 400 yards a game. Neither offense reached 300 yards on the day and both teams combined for just 27 points as the Big Red outlasted the Eddies 19-8.

“We did a very good job defensively,” said Edwardsburg coach Kevin Bartz. “But they were bigger and physical up front and got some good pushes against us.”

The Eddies’ defense had the first opportunity to make its presence felt. After Muskegon methodically marched the ball inside the Eddies 10-yard line, the Edwardsburg defense stepped up and forced an incomplete pass on fourth down.

Neither team could get their offense going in the first quarter as they battled to a scoreless tie after one quarter.

Early in the second quarter the Big Red once again marched deep into Edwardsburg territory. Just as it looked like the Eddies defense was once again going to make a big stop, Andrew Ward took an option pitch from Kalil Pimpleton and raced 11 yards for the Big Red touchdown.

After Muskegon forced another Edwardsburg punt, backup quarterback La’darius Jefferson took the first snap 79 yards to put the Big Red up 13-0 with 7:15 to play in the half.

Edwardsburg finally got something going on offense and marched the ball down to the Muskegon 10-yard line before failing to convert a fourth-and-one play with just over a minute left in the half.

“That was a huge play for them,” Bartz said. “If we had gone down five or seven points at that time it changes a little bit of the way the game is played.”

The Big Red took the second half kickoff and their offense trudged its way through the snow and the Eddies defense as Jefferson punched it in from 3-yards out putting Muskegon up 19-0.

Both teams would exchange possessions several times before Austin Cline would bust through the Big Red defense for 21 yards and an Eddies touchdown.

The 2-point pass from Cameron Ekanayake to Nick Bradley cut the lead to 19-8 with 2:34 remaining, but unfortunately for the Eddies, it was all the points they’d get as the Big Red would run out the clock and advance to the state championship game against Orchard Lake St. Mary’s.

Bulldogs take a bite out of Rangers