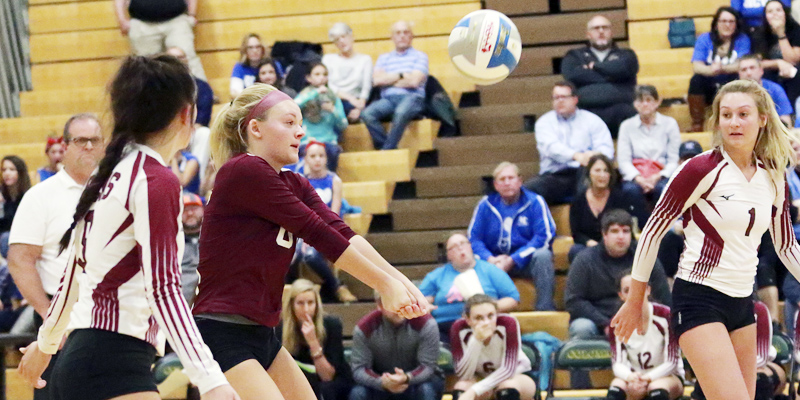 Taylor Strauss returns a serve for Buchanan against Harper Creek in the Class B regional semifinals at Coloma Tuesday night. (Leader photo/AMELIO RODRIGUEZ)

The Beavers have knocked the Bucks out of the Class B regional tournament each of the past two seasons.

“It’s always good to take out someone that has ended your run the last couple of years,” said Buchanan coach Lisa Holok. “It feels so good. It is really nice to finally have some redemption against a team that has ended our season the last two couple years, which we felt was too soon.”

The Bucks received a huge boost with the return of senior standout defender Taylor Reed, who has been out with a concussion.

“Taylor Reed is a phenomenal defender,” Holok said. “The game flows so well when all of our seniors are together on the court. Her energy, and her spark and her heart, it was just good to have everybody back.”

Buchanan came out flying right from the start, jumping out to a dominating 18-5 lead in set one before finishing of Harper Creek 25-8.

The Bucks, who have seven seniors who have played together for several years, played relentless defense and aggressive,

“Our defense is really good,” Holok said. “We have some people that can put the ball away, but it’s our passing and our defense that’s going to win us points and keep us moving forward in the post season.”

“Frankie’s done a great job putting herself back in a position to return to the team,” Holok said. “I know she didn’t want to miss this journey with this group of seniors.”

Offensively, the Bucks had three people that were able to put the ball away pretty consistently all night.

Strefling led the Bucks with 21 kills, but it was Kuntz with 18 and Alex Tobler with 15 that really stepped up noticeably.

“Our girls have stepped up all season, not just tonight,” Holok said. “When Frankie went out (injury) it made us better because the seniors all pulled together and they had to do their job.”

The Bucks have proven all year that they have a team that is capable of going a long way in the state tournament, and if they can continue to play stout defense and consistent offense, they are going to be a tough out.

“If everybody does their job, top to bottom, people aren’t going to be able to stop us,” Holok said.

Buchanan (48-6) advances to the Class B Regional Final on Thursday night against the winner of Plainwell and Vicksburg.

I doubt anyone will stay home to watch Big…