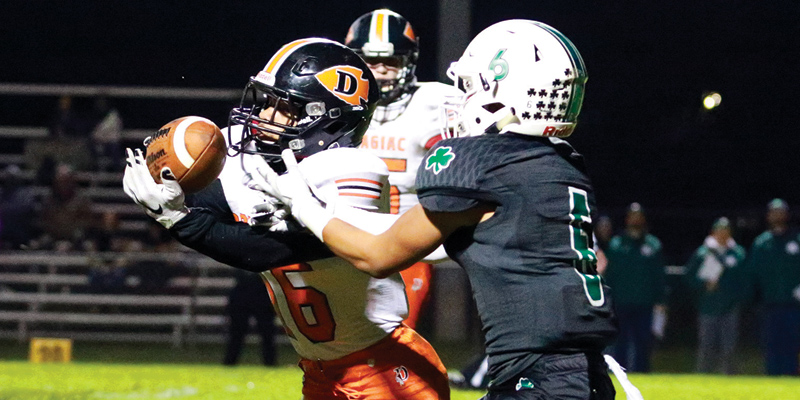 Host Berrien Springs was able to muster just enough offense to pull out a 14-7 victory at Sylvester Field.

“We missed some plays,” said Dowagiac coach Mike Stanger. “At times we had guys open and we missed. We had stuff open and we didn’t execute.”

In what was previewed to be a defensive matchup proved to be exactly that as both offenses struggled early to get anything going.

“Give credit to Dowagiac,” said Berrien Springs coach Tony Scaccia said. “They are an aggressive downhill defense. Coach (Pat) Lyle is familiar with what we do and vice versa. We scrimmage each other every summer. There’s a lot of familiarity there.”

It was clear that part of the Chieftains’ game plan was to contain Shamrock quarterback Brennen Boone, who they limited to 18 rushing yard on 15 attempts.

Unfortunately for the Chieftains, Shamrock running back Nate Nannfeldt was able to run over and through the Dowagiac defense for 146 yards on 23 carries, several times carrying Chieftain defenders with him for extra yards before finally being tackled.

Dowagiac (7-4) gave itself several opportunities to turn the game in its favor, but just couldn’t finish the play.

After Caleb Murphy blocked a Shamrock punt, the Chieftains took over on the 15-yard line and failed to convert the drive in to any points.

“I couldn’t have asked for a better defense out of our kids,” Stanger said. “I just wished we capitalized a bit more on the offensive side of the ball.”

It was Murphy who once again would make a play for the Chieftains as he stripped the ball from Nannfeldt deep in Shamrock territory setting the Chieftains up with a first down on the 20-yard line.

After a 16-yard pass from Brenden Dudley to Marcus Winchester-Jones, it was Dudley who called his own number and punched it in cutting the lead to 14-7 with 8:14 remaining in the game.

After the defense came up big once again forcing another Shamrock punt, the offense took over with the ball near midfield, and 2:07 left on the clock.

After a couple of miscues on their first couple of plays, it came down to fourth and long with 1:12 remaining. Dudley let one fly deep to Erik Walker, who went up over the defense to make the catch at the Shamrock 15-yard line, but on his way down Boone made the play of the game for the Shamrocks as he knocked the ball out of Walkers’ hands causing it to fall to the ground resulting in an incomplete pass and the end of the Chieftains football season.

“Give their kid credit,” Stanger said. “Their kid played the ball great, our kid had it and they just batted it away. That’s where I wanted the ball, the quarterback put it there they just made a good play.”

Dudley led the Chieftains in rushing with just 20 yards on five carries, while he only completed 6-of-24 passes for 53 yards.

“Our kids never quit fighting,” Stanger said. “They played hard, and they never gave up.”