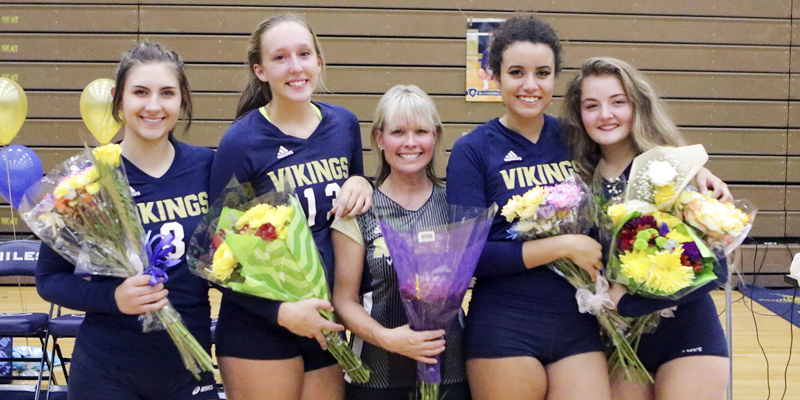 Emotional for the parents as they realize their child will not play a specific sport on their home court again.

Emotional for the coach as the relationships that have been forged with certain players will soon be ending — at least as coach and player.

But it is probably the most emotional for the players themselves as all the hard work, practices, bus rides and long days of playing their sport will soon be wrapping up, not to mention their high school years.

All four seniors — Nola Wallace, Alexandria (Lexi) Smith, Megan Kohler and Madison Cavanaugh — have been a part of the Vikings volleyball program for the last four years and have all had a hand in this team being the winningest in Vikings history.

They helped set the school record of 43 wins in a season last year and the team is currently 38-3-4 this season with plenty of volleyball yet to be played.

“They are the dream team, that’s for sure,” Niles coach Jenny Nate said. “The wins show what these girls are made of, day after day after day. They are still practicing at 100 percent at top speed, giving their full effort to each other, every day.”

There is no doubt these four young ladies are the leaders of the team, as well as the heart and soul of the Vikings.

“The senior leadership this year is amazing,” Nate said. “They treat everybody with respect. †hey are kind. They have set an example and precedence for how everybody should treat each other on a team and in a program. Because they are setting that example it’s only helping build Niles volleyball.”

Not only do these seniors have the respect and admiration of their coach and their community, but more importantly they are respected by their teammates.

In fact, in Wednesday night’s SMAC conference volleyball match against Lakeshore, which Niles swept 25-16, 25-17, 25-17, not a single player for the Vikings would substitute a senior out of the game.

“We ended the night with all of our seniors on the court,” Nate said. “It’s really something when your players refuse to let the seniors come off the court. I was impressed. They really fought for themselves and their school tonight.”

It’s easy to see the pride the seniors have in being a part of something as special as the Viking volleyball program and what it means to have accomplished everything they have to this point.

“This team means everything,” Kohler said. “This is the dream team and there is nothing that could ever replace the memories that we’ve made. It’s all been awesome.”

“I wanted us to go out with a bang and I wanted our last home game to be one of the best games we’ve played and I think we came out ready to play,” Smith said.

As much as these seniors have meant to the Vikings volleyball program, the program has meant that much to them as well.

“I came into the program (freshman year) having never played volleyball before, but they took me in anyway and they’ve turned me into a great volleyball player. I have people coming up to me talking to me about playing in college, and telling me how much I’ve improved and that means a lot,” Wallace said.

These girls had a goal when they first started playing to win conference and while that might not seem like a lofty goal, it’s an accomplishment that shows on the school’s volleyball banner, which only has one title on it.

“I don’t have words to explain what it means knowing that our team last year was the first team to ever put anything up on that banner,” Smith said. “I feel like if I ever have to come back to the school in the future it will be heartwarming to know that I was on a team that accomplished something. Even though winning conference isn’t huge, it’s something, and it’s history for the school.”

“Our goal was to leave a legacy, and I think we’re leaving it,” Kohler said.

These young ladies aren’t done with their legacy just yet or with adding things to the school’s history.

Grace Polomcak had 16 kills for Brandywine to go along with 20 digs and five aces.

Olivia Thomas finished with 11 kills and eight blocks, while Lauren Smrek had nine kills and Audrey Longley had 44 assists and five aces.