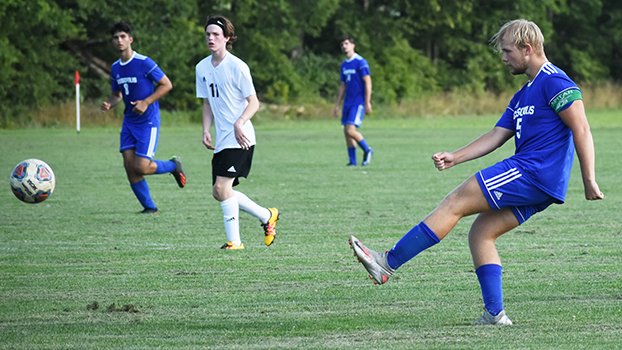 EAST LANSING — The finalists for the Michigan High School Athletic Association Scholar-Athlete Award sponsored by Farm Bureau Insurance have been announced, and Cassopolis senior Logan Pflug is one of them.

The MHSAA recently released its list of 120 finalist for the award, which is now in its 34th year recently. The award honors 32 seniors who participate in at least one sport that the MHSAA sponsors.

Farm Bureau Insurance is the underwriter for the Scholar-Athlete Award and will present the 32 winning seniors with a $2,000 scholarship. To date, Farm Bureau has awarded 896 scholarships.

Pflug, who plays soccer, football and golf for the Rangers, is not the only southwest Michigan student-athlete to be named a finalist.

Watervliet’s Samantha Dietz, who is the daughter of former Dowagiac teacher and coach, as well as current Panther Athletic Director Ken Dietz, and Macey Springer, of River Valley High School.

There will also be two at-large winners given to minority recipients, regardless of school size.

Schools, which are MHSAA members, were allowed to submit as many applications for the Scholar-Athlete Award as there scholarships available in their classification, and could have more than one finalist. A total of 14 schools had two or more finalists, including Kalamazoo Loy Norrix, which was one of two schools with three finalists.

To be eligible for the award, students must have a cumulative grade-point average of 3.50 (on a 4.0 scale) and previously have won a varsity letter in at least one sport in which the MHSAA sponsors a postseason tournament. Students also were asked to respond to a series of short essay questions, submit two letters of recommendation and a 500-word essay on the importance of sportsmanship in educational athletics.