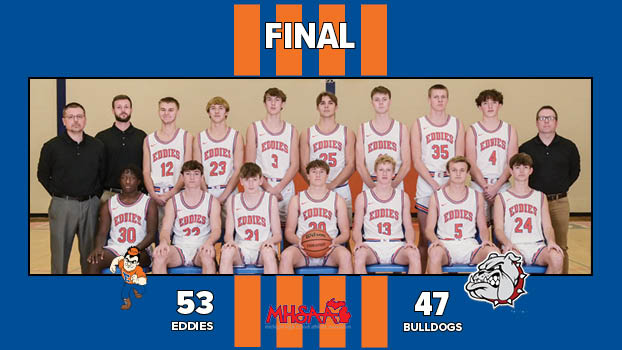 The Edwardsburg boys basketball grabbed a first-quarter lead and went on to post a 53-47 victory.

The Eddies (6-3, 5-1 Wolverine) opened up a nine-point lead in the first quarter and then held off the pesky Bulldogs.

Leading 20-11 after eight minutes of play, Vicksburg (2-8, 2-5 Wolverine) cut the Edwardsburg advantage to 30-26 by halftime. The Eddies increased their advantage to seven points (40-33) by the end of three quarters, which is where it stayed for most of the final quarter.

Mason Crist poured in a game-high 21 points to lead the Eddies, while Owen Eberlein added 10 points. Annon Billingsley and Matt Anders both finished with seven points.

Malik Bloodworth had 10 points to lead the Bulldogs.

The Eddies are off until Friday night when they host Plainwell in a Wolverine Conference game. 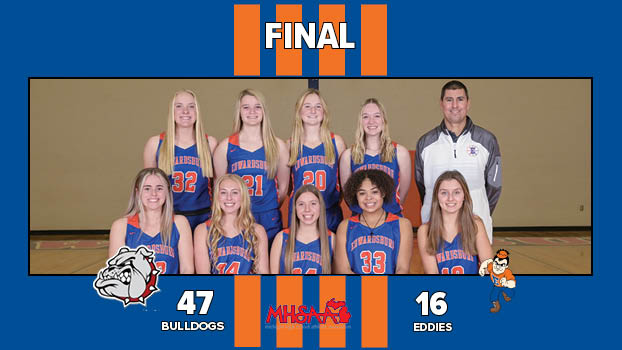 The No. 7-ranked Bulldogs turned up the defensive pressure against the Eddies, holding the visitors to nine first-half points.

Vicksburg (12-0, 8-0 Wolverine) then shutout Edwardsburg (8-4. 5-2 Wolverine) in the third quarter and held the Eddies to just seven points in the final 16 minutes of play.

The Eddies are back on the road Monday as they had to St. Joseph for a non-conference contest against the Bears.