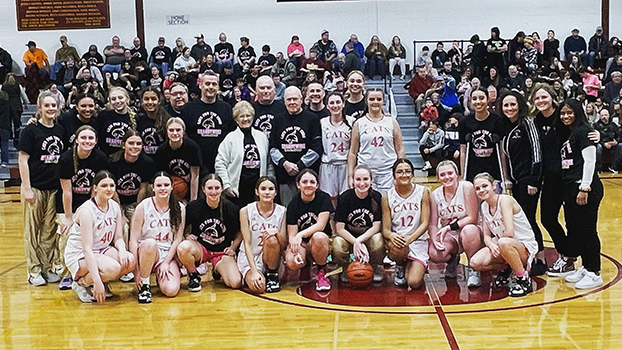 Knapp, who had knee surgery during the off season, played approximately 20 minutes for the Bobcats, who improved to 7-1 with the victory, Knapp finished with 12 points.

Leading 13-12 in the second quarter, Brandywine used a 13-0 run to take control of the game open. The Bobcats led 28-17 halftime advantage.

A 15-0 run to start the second half turned the game into a rout.

Adeline Gill led Brandywine with 16 points while Adelyn Drotoz and Kadence Brumitt both finished with 10 points.

Faith Edwards scored a game-high 20 points to lead the Bulldogs, who drop to 4-6 on the year.

The Bobcats are back in action Tuesday night as they head to Cassopolis for a non-conference contest against the 9-2 Rangers.

The Rangers won their fourth consecutive contest, and their ninth in their last 10 games, to set up Tuesday’s showdown with the Bobcats.

With the victory, Cassopolis remained atop the Southwest 10 Conference standings with a 7-0 record.

The Rangers led 15-6 after the opening quarter and 32-15 at halftime. Cassopolis took a 40-26 lead into the final eight minutes of play.

Ryley Bowsher scored a game-high 17 points to lead the Rangers, who also got 12 points from Ella Smith and nine points from Atyanna Alford.

Shelby McDaniel and Bailee Freedine both had nine points for the Chiefs, who drop to 6-7 overall and 3-4 in Southwest 10 Conference action.