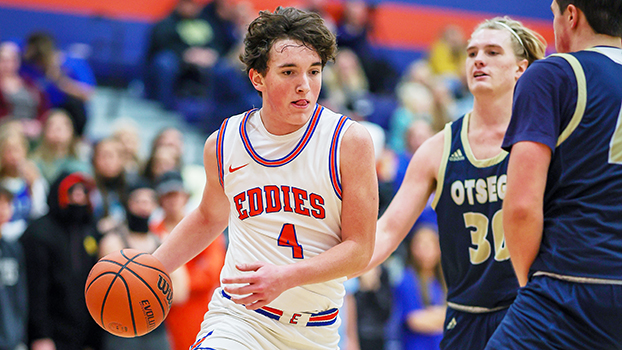 EDWARDSBURG — To say the Edwardsburg boys and girls basketball are red-hot might be a bit of an understatement.

The two teams ran their winning streaks to four straight Tuesday night with a Wolverine Conference sweep of Paw Paw in home and home games.

The Eddies (6-2, 4-1 Wolverine) have not only won four consecutive games, but six of their last seven contests.

Tuesday night, Edwardsburg turned a close game into a rout in the second half by outscoring the Red Wolves 26-19 on its way to a 52-32 victory.

The Eddies led just 16-13 after one quarter and 26-17 at the intermission. Edwardsburg broke the game open in the third quarter by outscoring Paw Paw 16-6.

Brody Schimpa scored a game-high 16 points to lead Edwardsburg, which also got nine ponts from Owen Eberlein and six points from Zach Bartz.

Edwardsburg heads to Vicksburg Friday night for a conference contest with the Bulldogs, who were defeated by Niles 60-34 Tuesday night.

Like their male counterparts, the Edwardsburg girls team has been on fire since losing back-to-back games in December.

Not only have the Eddies won four straight, but they have now won seven of their last eight games. The victory over the Red Wolves sets up Friday night’s Wolverine Conference showdown on the road with undefeated Vicksburg.

The Eddies (8-3, 5-1) got off to a quick start against Paw Paw, leading 19-10 after the opening quarter, but were unable to maintain that momentum as the Red Wolves cut Edwardsburg’s lead to 29-24 by halftime, and then outscored the Eddies 8-2 in the third quarter to take a 32-31 lead.

Edwardsburg also got nine points from Averie Markel and seven points from Chloe Baker. The Eddies played without Kenzie Schaible and Val Johnson due to illness.