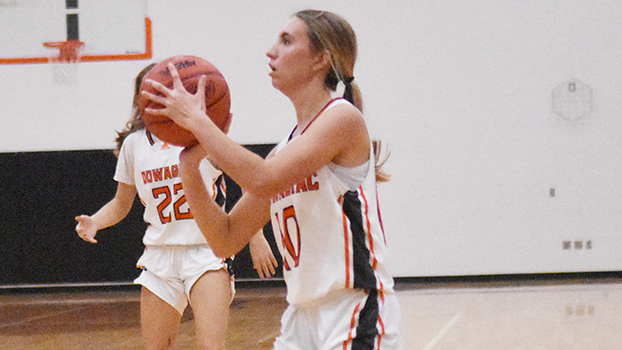 DOWAGIAC — Despite struggling offensively, host Dowagiac was able to win its second straight game as it knocked off Lawton 32-19 in non-conference girls basketball Tuesday night.

The Chieftains, who has won three of its last four games and back-to-back games for the third time this season, scored just two points in the opening quarter.

Fortunately for Dowagiac, Lawton was not much better offensively as the Blue Devils took the early 8-2 lead after the opening quarter. The Chieftains (6-4) trailed 9-3 early in the second quarter when it finally started to turn things around offensively.

“Tonight, we got off to a slow slow start,” said Dowagiac Coach Jason Turner. “We were down 9-3 early in the second quarter, but from that point on we woke up defensively and had a great defensive game.”

Dowagiac outscored Lawton 11-4 in the second quarter to take a 13-12 lead at halftime. The Chieftains scored 13 more points in the third quarter while holding the Blue Devils scoreless to open up a 26-12 advantage heading into the final eight minutes of play.

Playing part of the game without one its top scorers, Turner said the rest of the squad picked up the slack.

“Maggie [Weller] got into early foul trouble in the first quarter and we did a great job playing as a team and picking her up,” he said. “Josie [Lock] knocked down some big shots for us and Alanah [Smith] had a great game in the post. Overall, I am very proud of our defensive effort.”

Dowagiac returns to Lakeland Conference play Thursday night as it heads to Buchanan to take on the Bucks for the second time this season. Buchanan defeated the Chieftains 64-21 on Dec. 1.