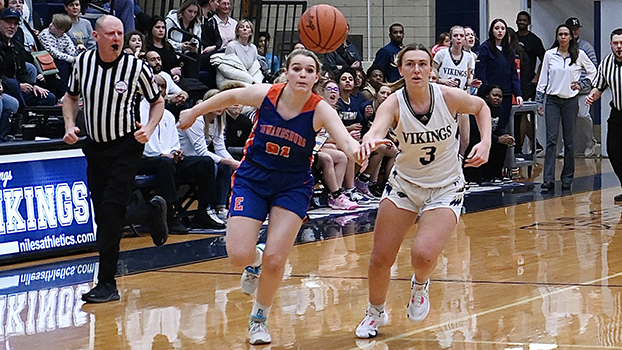 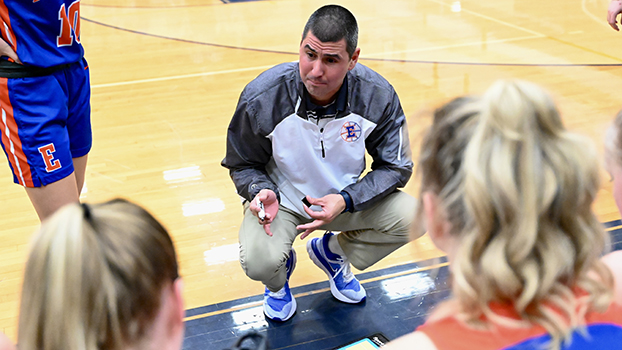 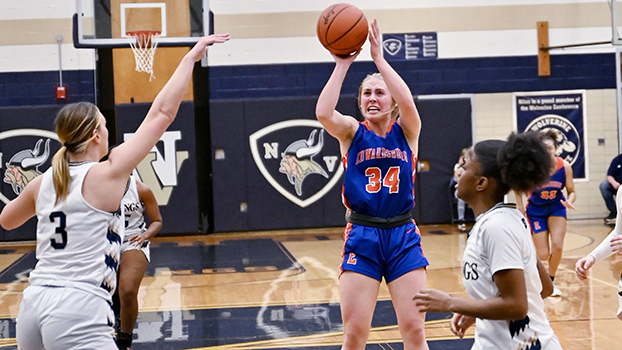 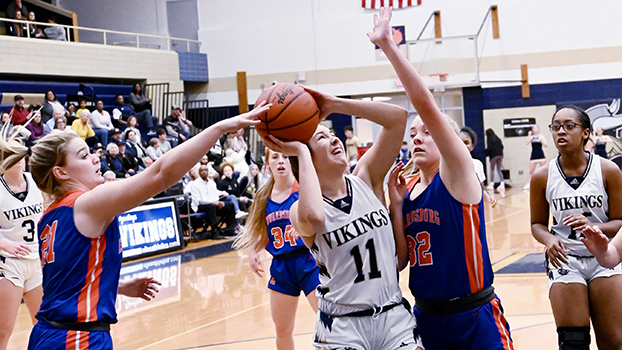 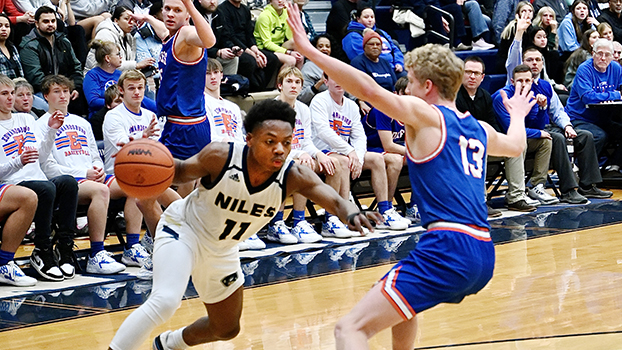 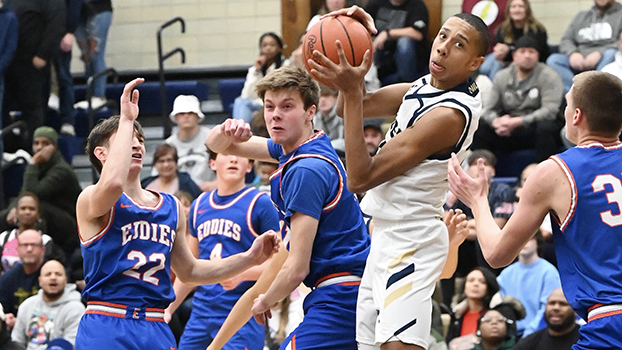 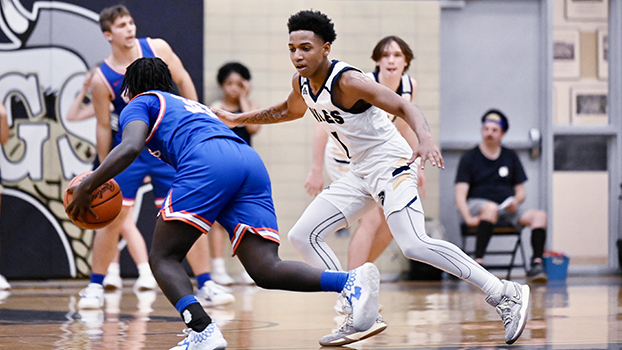 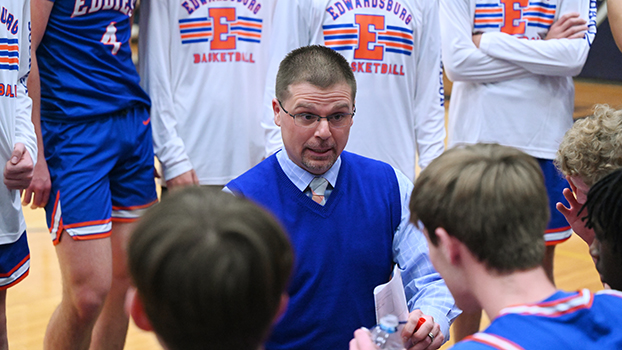 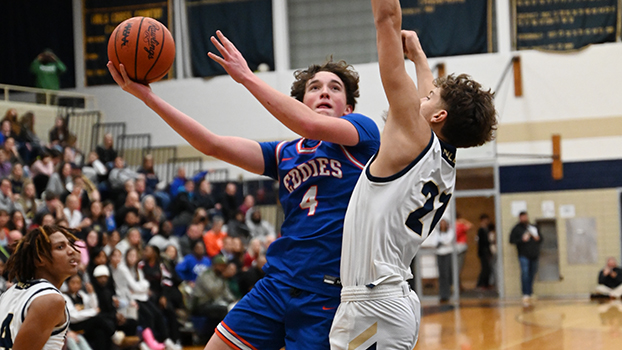 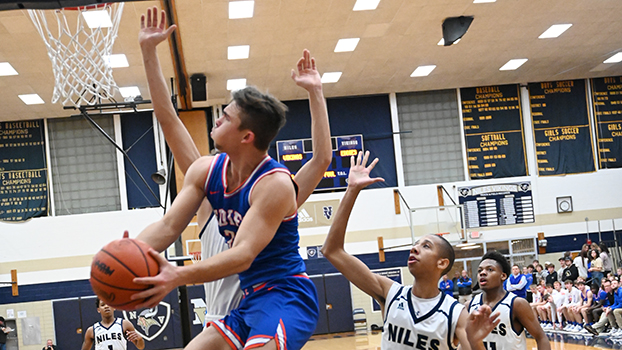 NILES — They say that basketball is a game of runs, and the Wolverine Conference contest between the visiting Edwardsburg Eddies and Niles Vikings was just that on Friday night.

The Eddies had multiple offensive rebounds, but couldn’t find the bucket at the beginning, allowing Niles to score the first points of the game.

Both teams continued to go back and forth throughout the first quarter, with Edwardsburg leading 12-10 at the end of the frame.

Niles (3-5) finally broke through midway through the second quarter and used a 10-0 behind three straight Edwardsburg turnovers and led 30-21 at halftime.

The run continued with the Vikings leading 41-26 with three minutes remaining in the third quarter. Anthony Brady had seven points in the quarter and a game-high 18. He drained five 3-point buckets throughout the game.

“They (Niles) took control of the game in the third quarter,” said Edwardsburg Coach Steve Wright. “It seemed like it was going all wrong for us, but we kept at it and eventually we found a way to win.”

The Eddies then went on the aforementioned 17-2 run and tied the game at 43 with 4:15 left in the game. Mason Crist had 10 of his 18 points in the final frame and finished with five steals [all in the fourth quarter], four assists, and a rebound.

Brady drained his fifth three of the game with 45 seconds left to cut the Eddies’ lead to 51-50.

A loose ball foul on Niles’ Jayson Johnson put Crist on the foul line where he increased the lead to three. Crist would then steal the final inbound pass and put the nail in coffin for the Vikings.

“Give Edwardsburg all of the credit,” said Niles Head Coach Myles Busby. “They played 10 times harder in the second half and we struggled to stop their run. We didn’t make sound decisions with the basketball.”

Edwardsburg was a perfect 8-for-8 from the foul line in the fourth quarter and 12-for-15 for the game.

Matt Anders was also in double figures for the Eddies with 12 points. He also had eight rebounds, an assist, a steal, and a block.

“I feel like games like this have been missing from southwest Michigan,” Wright said. “Two teams that are close together with a great crowd and environment.”

Visiting Edwardsburg Eddies used a balanced scoring attack as they coasted to a 67-29 win over the Niles Vikings on Friday night.

Valentina Johnson, Averie Markel, and Maddie Pobuda each scored a game-high 11 points and Kourtney Zarycki added 10 points in a game with a combined 54 turnovers.

Niles (0-10) struggled to find offense and quickly found themselves down double digits at the end of the first quarter. Elly Matlock had the Vikings’ four points in the quarter. She finished with a team-high eight points and 4 steals, 2 assists, and 2 rebounds.

Jessica Thornton and Amirah Lee each had seven points for the Vikings, followed by Kloe Kiggins with points, and with Alexandria Gerritts and Alizabeth VanDePutte scoring two points each.

Mackenzie Schaible had nine points for Edwardsburg, which also got six points each from Abby Bossler and Caitlin Tighe.

Both teams will be on the road for their next contests as Edwardsburg will play the Paw Paw Red Wolves and Niles will square off against the Vicksburg Bulldogs.