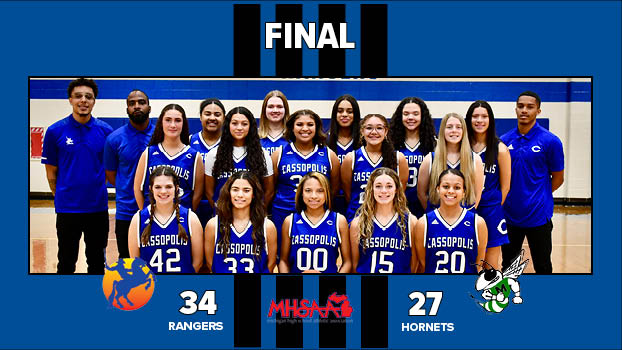 MENDON — A sign of a good basketball team is being able to meet adversity head-on.

If Thursday’s 34-27 Southwest 10 Conference girls’ basketball win for Cassopolis over Mendon is any indication, then Stefon Luckey’s Rangers are on the right path.

Following a tough loss in the Three Oaks-River Valley Holiday Tournament, Cassopolis turned to its defensive pressure to hand Mendon, now 8-1, its first loss this season.

Cassopolis, 7-2 overall and 6-0 league, now sits alone in first place. Mendon falls to 5-1 in the league.

Both teams struggled early on the offensive end of the floor during the opening period.

Following an early deficit, Cassopolis stormed back to take a pair of the lead twice. Mackenzie Boyer’s 3-pointer put the Rangers in front 7-6 with one minute left in the stanza. Mendon came up with a steal, however, and a bucket inside by senior post player Keyara Syzmanski that gave the Lady Hornets an 8-7 edge after one quarter.

Cassopolis used its relentless pressure to force Mendon into nine of its 21 turnovers during the second stanza.

The Rangers began the period strong with a 10-0 run and held on for an eight-point, 17-9, halftime advantage.

“We needed that big offensive spark in the second quarter after starting the game out kind’ve slow,” Luckey said.

Mendon used some key free throws in the third quarter to remain close. Szymanski’s basket underneath at the end of the third period lessened Cassopolis’ lead to just five, 23-18.

“At halftime, we talked about stepping up and meeting the adversity. We’ve been punched in the mouth a couple of times this year already and weren’t able to get back up. But this time, we responded well,” Luckey said. “We played better as a team tonight. This win gives us a lot of confidence going forward. Two years ago, this group of girls didn’t even win a single game.”

Quianna Murray, a senior guard, hit her fourth triple of the game to ignite the Rangers’ fourth-quarter scoring. Murray’s bucket there extended Cassopolis’ lead to 10, 28-18, with 5:57 left.

A layup by Mendon freshman Jadyn Samson with 1:53 pulled the hosts within seven, 30-23.

However, Cassopolis got clutch free throws in the final minute from Ella Smith and Murray, along with a Atyanna Alford layup to seal the win.

Murray led Cassopolis in scoring with 13 points, followed by Alford with 10. Boyer finished with three and Ryley Bowsher, Alexis Millirans and Rachel Williams scored two apiece and Ella Smith and Janayla Franklin had one point for the winners.

Williams gave the Lady Rangers solid minutes off the bench, especially during the second half by grabbing five rebounds.

Alford led Cassopolis on the boards with seven.

“We made a lot of uncharacteristic turnovers,” said Mendon Coachh Buzz Griffith. “We’re a very young team. Cassopolis throws a lot of pressure at you and they are well-coached. I thought we did a nice job of getting the ball into the post and getting to the foul line. We weren’t able to convert those free throws when we had the opportunity. This is a good game for us to learn and get better from.”

Mendon shot a chilly 13-of-32 from the free-throw stripe.