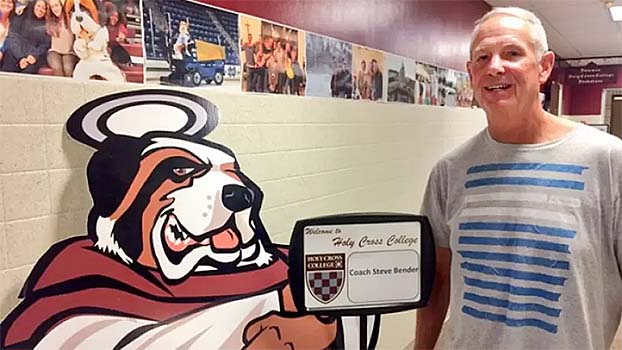 Steve Bender, seen here in 2017, has announced his retirement from coaching after 44 years. (Submitted photo)

He took over the Saint Joseph program in 2009. In his 13 years coaching the Indians, Bender’s teams went 244-33 in dual matches with 13 section titles, eight Northern Indiana Conference championships, four regional titles and one semi-state championship.

“What a ride we have taken over the past 13 years,” Bender said. “In the beginning, we were a fractured and disjointed group of individuals and developed into the closest tennis family imaginable. I must admit when I was teaching and coaching for 32 years at a public school in Michigan my perception of Saint Joseph as a private school was not positive. I was so wrong. It was a blessing to coach great young men and develop ever-lasting relationships with the parents. Every moment I spent on the courts coaching Saint Joseph was Shangri-La.”

Bender said that he enjoyed his years there.

“Words cannot express what Saint Joseph tennis has meant to me,” he said. “It has provided me with such joy, and hopefully, our tennis family feels the same. We shared a lot of success on and off the court, but no greater joy was what we all shared through our Bridging-Bonding-Building program. So many life lessons were learned. Tennis teaches us all so much about life. It pushes us to our limits physically, mentally, and emotionally, and our true character is revealed during the pressure moments of playing the game. My greatest coaching enjoyment was to watch our young men play for something more important than themselves. There is nothing more important than the team.”

In Bender’s 22 seasons in Buchanan, the Bucks were 200-16-8 in dual matches. He coached 25 first-team All-State tennis players. Buchanan won 58 consecutive Lakeland Conference dual matches during his tenure and had a 66-match winning streak overall.

The Bucks had 10 undefeated seasons while winning 16 conference, 14 regional championships and the 2003 state title.

Bender is a member of both the Michigan and Indiana tennis hall of fames. His overall tennis record is 463-51 (90 percent).

Bender spent one year as Head Basketball Coach at St, Mary’s College where he was named Michigan Interscholastic Athletic Association Coach of the year in 2006. He started the men’s and women’s tennis programs at Holy Cross College in 2017. He earned Chicagoland Collegiate Athletic Conference Women’s Coach of the Year honors in 2017.

His 44 years of coaching have landed him in five hall of fames, including Albion College and Buchanan High School.

After dedicating all those years to coaching more than 1,500 student-athletes and in 500 matches, it is time to move on to the next chapter of his life, which will be spent focusing on his family.

“During the past two months, I have spent a lot of time thinking about what is most important,” he said. “I have been very selfish the past 44 years and realize the right thing to do is devote more time with my family. They have been so loving and caring to me throughout my coaching career at so many different levels. It is time to put them first and do things on their timelines.

It is very sad for me to say goodbye to Saint Joseph tennis. We shared so many magical moments. I want to thank everyone for allowing me to be part of your child’s life. To the wonderful game of tennis, I love you and will never leave you.”