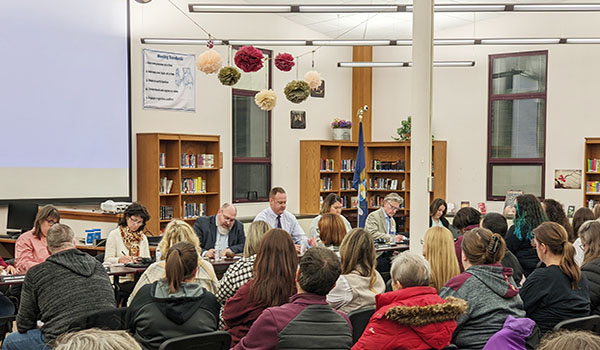 NILES CHARTER TOWNSHIP — The Brandywine Community Schools Board of Education began 2023 with the election of officers and committee assignments during its meeting Monday at Brandywine Middle-High School. Board members also heard from community members who asked the board and those in attendance to support the students in the years to come.

The Board welcomed four new members to its ranks – Thomas Payne, Angela Seastrom, Michelanne McCombs and Elaine McKee. The quadrant was elected in November to serve the BCS community for four-year terms ending in 2026.

Payne, a director of sales for IGS Energy, was elected with a 4-3 vote to the role of board president. Past roles include being a board member for the Dowagiac Christian Center as well as treasurer of the Postal Customer Council. Jessica Crouch was also nominated for the position but was voted down with a 3-4 vote.

“I’m honored to be president of the Brandywine Community Schools Board of Education,” Payne said. “I am looking forward to working with the community, board members and Superintendent Travis Walker to make Brandywine as good as we can as far as education, as far as civic responsibility and student performance. I’m looking forward to hearing from the community. We are very excited about the opportunity to serve.”

Fellow newcomers McKee and Seastrom were elected to the roles of vice president and secretary, respectively with 4-3 votes.

In other business, Walker presented those in attendance with data highlighting the district’s success regarding standardized testing. In a peer group consisting of similar sized districts in the state including Beaverton, Benzie Central, Caro, Kalkaska, Mason County Central, Montrose, Newaygo, Pine River and Vestaburg, Brandywine had the highest average SAT score with an average score of 970. Walker said the district was able to do this while receiving the fifth-smallest amount of funding of the 11 schools in the peer group, Brandywine received the fifth smallest amount of funding.

“That is definitely a point of pride in our district,” he said. “When you look at schools that are like you and can say that we are doing things well, that’s something we’re really proud of. It’s not something we’re gonna rest on…We still want to get to the top of the county, to get to the top of the state. We’re always driving for that, but we know we’re doing some things well based on what we’re working with.”

Making decisions for the benefit of Brandywine students was the topic of public comments made by August Garritano. A Brandywine graduate, Garritano co-founded Performing Arts Workshops – PAW inc. in 2012 and serves as the executive director.

Garritano requested that the board continue to pursue inclusivity for its student body and respect students’ right to peacefully assemble.

“When I was a student here, outside this room, we met every Tuesday morning and we had a prayer circle,” he said. “Sometimes we met around the flagpole and we prayed – that’s allowed, it’s a peaceful assembly. That also applies to the Gay Straight Alliance – (Brandywine) did not have one when I was here. It is really great that Brandywine has one now because there are gay kids that go to Brandywine Community Schools; there are trans kids that go to Brandywine Community Schools and their rights to peacefully assemble cannot be hindered.

“So I just wanted to make a public declaration of that and I hope that the board is fully supportive of the GSA of Brandywine and will continue to support all students in their right to peacefully assemble.”

In further business, the board agreed to change the time for its January 23 meeting to 6 p.m. The change was done to accommodate the Michigan Leadership Institute’s Governance Workshop that will take place during the meeting. The Michigan Leadership Institute offers governance workshops for superintendents and their boards who want to work together effectively, establish an interdependent relationship and maintain focus on clearly identified indicators of success.