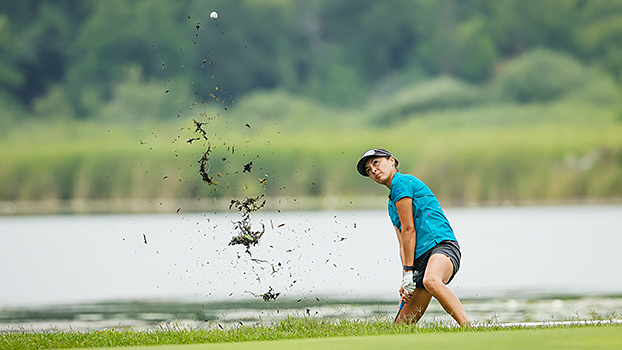 Gabby Lemieux hits out of a hazard in the final round of the Four Winds Invitational at the South Bend Country Club in South Bend, (Leader file photo)

NILES — The Epson Tour has announced its 2023 tournament schedule, which will include the Four Winds Invitational, which will once again be hosted by the South Bend Country Club.

The Four Winds Invitational will be played Aug. 7-13, and will feature the most money in its 43-year history, as well as having its largest tournament purse.

The Epson Tour, which is the official qualifying tour for the LPGA, will feature 22 stops in 14 states. It will offer more than $4.9 million in prize money in 2023. Tournament purses will average $223,000. Both eclipse last year’s record-setting totals.

“We are delighted to unveil the 2023 Epson Tour schedule,” said LPGA Commissioner Mollie Marcoux Samaan. “This terrific lineup of tournaments is a big step forward in realizing the Epson Tour’s goal of providing the best opportunities for women pursuing their dreams on the golf course. With help from the Seiko Epson Corporation, our tournament partners and sponsors and the outstanding communities where we play, we’re proud to help provide these world-class athletes with the tools, opportunities and experiences they need to succeed at the highest level.”

Two tournaments — the Carlisle Arizona Women’s Golf Classic and the French Lick Charity Classic — will share the honor of being the largest purse in tour history at $335,000. Three other tournaments — Circle Raven Championship, Copper Rock Championship and Island Resort Championship — will also raise their purses to $225,000, $220,00 and $225,000, respectively.

Epson is in its second year as title sponsor.

“Our partnership with the LPGA presents a unique opportunity for Epson to empower future women leaders around the world,” said Epson global president, Yasunori Ogawa. “Heading into the second year of the partnership, Epson is proud to support the dedicated and exceptional golfers chasing their dreams of playing on the LPGA who will compete on the Epson Tour in 2023.”

The Epson Tour will not only be offering more money, tournament in new areas of the country.

Utah will also see another tournament in 2023, with the addition of the Black Desert Resort Championship. Players will be competing for the second largest purse of the season, $300,000, in Salt Lake City, with course information to be announced at a later date.

The Epson Tour will also return to North Carolina in 2023. The new tournament, with details being announced at a later date, celebrates the tour’s diversity and DE&I initiatives.