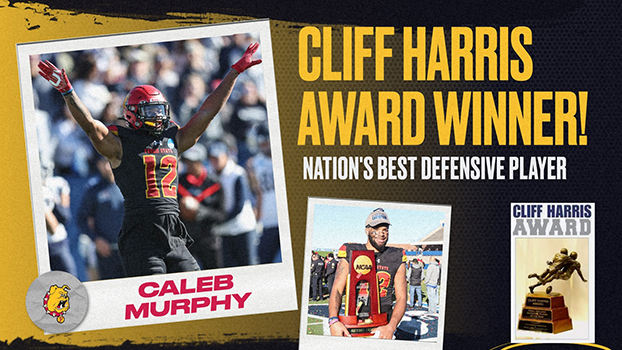 BIG RAPIDS —  Ferris State University football senior defensive end Caleb Murphy, who led FSU to a second-straight NCAA Division II National Championship this past fall, has earned yet another major national honor by being chosen today as the 2022 recipient of the Cliff Harris Award, which is presented to the nation’s top small college defensive player and recognized as one of the top honors in all of college football.

With the latest honor, Murphy has now claimed every major defensive player award possible this year, including the Gene Upshaw Division II Lineman of the Year Award, the Ted Hendricks Award presented to the nation’s top defensive end and the Division II National Defensive Player of the Year honor in addition to the Cliff Harris Award. He becomes the first FSU player to ever receive the Cliff Harris Award.

As this year’s recipient, Murphy, of Dowagiac, is slated to be honored at the Little Rock Touchdown Club’s annual awards banquet on Jan.13, with featured speaker Joe Theismann. He will receive the $3,000 Cliff Harris Award trophy presented by Cliff Harris.

Previously, Murphy was tabbed this year as the 2022 Ted Hendricks Award recipient as the nation’s top defensive end regardless of level and also recognized as the 2022 Gene Upshaw Division II Lineman of the Year Award winner.

Murphy played the past two seasons on the field for the Bulldogs and recorded 40 sacks, 60.5 tackles for loss (353 yards), 156 total tackles and eight forced fumbles. His teams went 9-0 in the NCAA Division II playoffs. Murphy’s accolades this season include the Gene Upshaw Award (D-II Lineman of the Year), First-Team AFCA D-II All-America, the sole defensive player named a finalist for the Harlon Hill Award (D-II Player of the Year) and GLIAC Player of the Year. He will also represent Ferris State at the East-West Shrine Bowl in Las Vegas on Feb. 2.