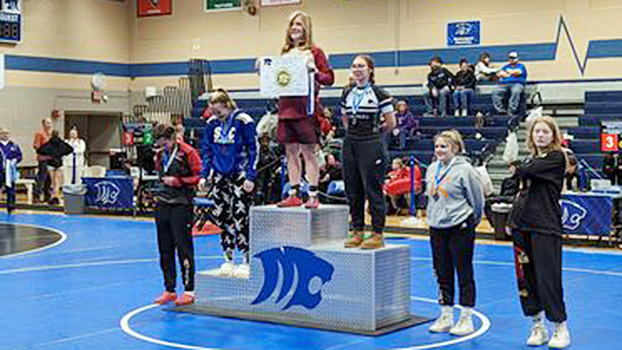 MONTAGUE — The field in the 145-pound weight class at the Lady Mat Cat Wrestling Invitational hosted by Montague did not stand a chance against Brandywine’s Maddison Ward Thursday.

Ward went 4-0 en route to winning the 145-pound championship. She pinned each of her opponents.

The Bobcats’ Mackenzie Will finished fourth in the 235-pound weight class.

Marcellus also picked up a championship as Gabriella Allen won the 190-pound title, while Carlee Osborn was the runner-up at 155 and Memory Sylvester was fifth at 170.

Ward pinned Clinton’s Kierra Fivenson in 50 seconds in the first round, pinned Lake City’s Morgan Ketchpaw in 1:09 in the quarterfinals and Standish-Sterling’s Aeronna Walther in 1:58 in the semifinals.

Ward pinned Abby Vanderzwaag, of West Ottawa, in 46 seconds in the title match.

The Wildcats’ Allen was 3-0 on the day in winning her championship.

Allen pinned Kylie Williams, of Olivet, in 1:13 in the first round and Paige Reynolds, of East Kentwood, in 1:46 in the semifinals. Allen pinned Caledonia’s Kiersten DeHaan in 2:58 in the championship round.