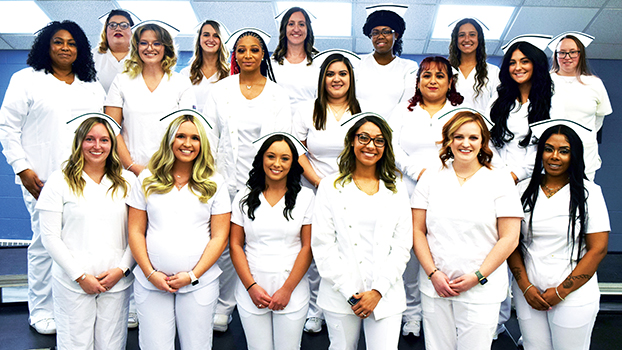 The federal government projects that more than 203,000 new positions will be created each year through 2031.

December’s class received associate degrees in nursing in a pinning ceremony in the theatre of the Dale A. Lyons Building on the Dowagiac campus. The class joins the ranks of 3,164 nursing graduates.

“Things this class has gone through as they progressed through this program are plentiful enough to lead to a breaking point. But this class never broke. They persevered and obstacles never blocked their path,” Kennedy said. “They may have had to slow down, but they never stopped. If one stumbled, another was there to pick them up. When one cried, another was there to be their shoulder. No nursing student left behind. This class is everything nursing is supposed to be — kind, loving, compassionate, intelligent, advocates, dreamers, students.

“The past two and a half years have been challenging for us all, and the nursing profession has been strained in terms of patient load, acuity of the patients they’re taking care of, staffing shortages. So many nurses are tired, frustrated and their spirits have been broken.

“But this class is going to change that,” she said. “Just as they have been lights of support for one another on this journey, they’re going to go out in that big world of health care and make a difference. How do I know that? Because they already are.”

Turning back to their families, Kennedy said, “You already know that, right, because you let us have your lights for two years. Graduates, from the bottom of my heart, I want to thank you for letting SMC be part of your journey, and for allowing faculty and staff to become part of your story. Thank you for all the differences you’re going to make in nursing. I love you all.”

“Both my grandmothers were nurses,” said President Dr. Joe Odenwald in his welcome. “They took great care of me growing up. My maternal grandmother went through nursing school as a single mother in the 1960s, and her mother helped raise my mother while she was doing that. It was a means of finding a career and financial stability. She grew up on a 40-acre farm, one of 13 children. She said she had a couple of options as a woman. She could be a teacher, a nurse or work for Sears and Roebuck, which she did for a year in Memphis.

“Our nursing students’ stories are special to me. You need a nurse coming into this world and you’re going to need one going out.”

A slideshow as guests filed in was dedicated to Valentine DiCerto, SMC’s first male LPN graduate in 1969. Born Dec. 23, 1948, in Niles, he died last spring in California at 73.

Nichole Johnson, pinned by her daughter, Jurnee, a psychiatric nurse who graduated from SMC in December 2018, was presented a Lamp of Knowledge by Associate Professor Rona Goodrich in recognition of the peer-selected Florence Nightingale Award embodying selflessness, compassion, thoughtfulness, team play, dependability, generosity and humility.

“I thank SMC’s staff and my classmates for their guidance, reassurance and assistance over the last two years,” she said. “Tonight marks the end of a 30-year expedition, and the most difficult experience of my life. After doubting myself for years and listening to destructive voices, I am finally facing my biggest fear. I was always afraid of people saying, ‘Who does she think she is?’ Now I have the courage to say, ‘This is who I am.’ I can and I will, just watch me.”