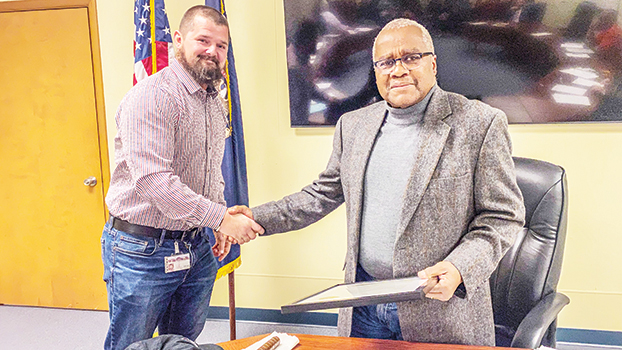 CASSOPOLIS — Three county commissioners were recognized for their years of service during their last meeting Thursday, and another Dec. 1.

Board Chair Dwight “Skip” Dyes was recognized for 12 years as a county commissioner by fellow Commissioner Ryan Laylin. Dyes served as representative for the third district, and volunteered on many boards and commissions, including the Van Buren/Cass District Health Board, Department of Human Services Board, Woodlands Behavioral Network Board, Southwest Michigan Solid Waste Consortium and the Land Bank Authority, among others. Dyes served as board chair in 2013, 2021 and 2022, and vice chair in 2017.

Vice Chair Mike Grice was recognized for six years as a county commissioner by fellow Commissioner Jeremiah Jones. Grice represented the sixth district and served on many boards and commissions, including the Cass County Transportation Authority, Kinexus, Woodlands

Behavioral Healthcare Network Board, Veterans Advisory Board as well as several others. Grice served as vice chair in 2021 and 2022.

Cass County Commissioner Dixie “Ann” File was recognized at the board’s Dec. 1 meeting for 20 years of service as a county commissioner in the second district. File served on the Planning Commission, Parks and Recreation Commission, Soil Conservation District, Appointments Committee and others.

Though Thursday was their last meeting, Benjamin, Dyes, Grice and File officially remain commissioners through the end of the calendar year.