Roundup: Chieftains head into break above .500; Rangers, Bucks on a hot streak 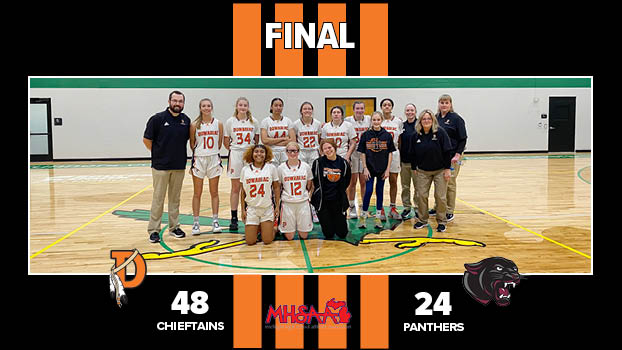 DOWAGIAC — The Dowagiac girls basketball team will head into the holiday break with back-to-back wins and a record above .500 for the first time in quite some time.

The Chieftains are not the only hot team heading into the break as Cassopolis and Buchanan are both riding five-game winning streaks.

The Chieftains followed up their victory over South Bend Riley at the Southwestern Michigan College Tri-State Holiday Classic with a blowout of host Parchment Tuesday night.

The Chieftains did not let up in the second half, taking a 38-18 lead into the final eight minutes of play.

“Tonight was a good night,” said Dowagiac Coach Jason Turner. “I challenged the girls to go into the break with a win and to get our record above .500 at the Christmas break for the first time in a really long time.”

“We had some balanced scoring again, which is really helping us out,” Turner said. “Our defense led to our offense really well tonight. We need to take these next two weeks over break to continue to get better on the things we are struggling with and to prepare for the rest of our season.”

Dowagiac returns to the hardwood Jan. 10 when it travels to Niles to face Brandywine in a Lakeland Conference contest.

The visiting Rangers improved to 4-0 in Southwestern 10 Conference action with a 55-34 win over Bloomingdale Tuesday night.

The Rangers increased their advantage to 39-32 after three quarters and then held Bloomingdale to just two points in the final eight minutes to seal the victory.

Atyanna Alford scored 16 points to lead Cassopolis, which also got 11 points from Ella Smith and nine points from Ryley Bowser.

Aquinnah Kelly had a game-high 22 points for the Cardinals. She was the lone Bloomingdale player to reach double figures.

The Rangers returned to action Thursday as it was scheduled to host Marcellus in another Southwest 10 Conference contest.

The Eddies rebounded from a loss to Elkhart at the Tri-State Holiday Classic with a 43-32 win over Mattawan Tuesday night.

Edwardsburg (5-3) grabbed a 14-11 lead after the opening quarter, which it stretched to 27-12 by halftime. The Eddies led 33-26 heading into the final eight minutes of play.

Mattawan’s Delany Elsmore scored a game-high 18 points to pace the Wildcats, who drop to 4-2 on the season.

The Bucks (5-1) have been on a roll since dropping its season opener to undefeated Vicksburg.

The Bucks exploded for 22 points in the opening eight minutes and never looked back.

Buchanan led 45-10 at halftime and 63-12 after three quarters. Most of the second half was played with a running clock.

The Falcons (1-5) did not have a single player eclipse double figures. Three players finished with fourth points.

Buchanan returned to the court Wednesday night when it hosted River Valley in a non-conference contest.