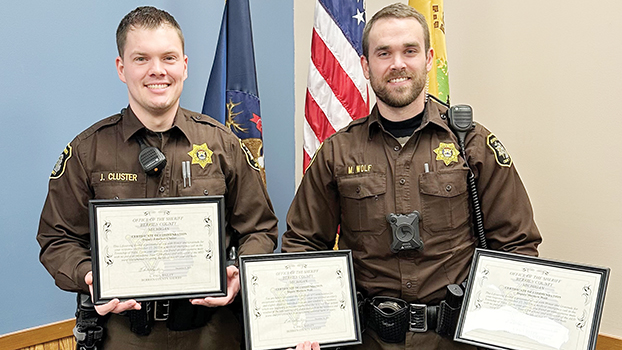 NILES — A pair of deputies were honored by the Niles Township Board with the Berrien County Sheriff’s Office Lifesaving Award for saving the life of a 43-year-old man at its meeting Monday night.

Berrien County Sheriff’s Office Deputies Matthew Wolf and Jonathan Cluster responded to a medical emergency Oct. 17 in Niles Township. When they arrived, they discovered the unconscious and unresponsive man.

The deputies utilized their automated external defibrillator and also performed CPR on the man until SMCAS personnel arrived on the scene. A total of six shocks from the AED were given by the deputes and SMCAS personnel.

The male was then transported to Corewell Health in Niles for further medical treatment. As a result of their efforts, the man survived a “full-arrest.

Wolf was also honored with a certificate of commention for assisting an 84-year-old female who was unable to excite a house fire on her own Nov. 14, due to recent hip surgery.

Wolf assisted the women through the open window as the home began to fill with smoke. He assisted her away from the structure and to the roadway.