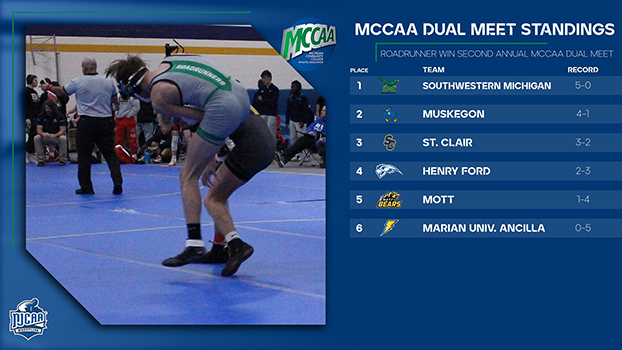 MUSEKGON — Nine months ago, there was no Southwestern Michigan College wrestling team as newly hired Roadrunner Coach Todd Hesson was trying to piece together the school’s first team in three decades.

Four months ago, Southwestern Michigan began practicing for its inaugural season. Three months ago, the Roadrunners hit the mat for the first team and did pretty well in an individual tournament.

Southwestern Michigan dominated the match with a roster filled with freshmen wrestlers. The Roadrunner knocked off St. Claire County Community College 27-21 in the opening round before defeating Ancilla College 52-6 Henry Ford College 55-10 and Mott Community College 42-11 to set up a showdown with perennial junior college wrestling powerhouse Muskegon.

The Jayhawks proved to be no match for the Roadrunners, who rolled to a 33-14 victory.

The dual meet tournament has no bearing on the conference championship, which will be decided Jan. 29 in Port Huron at the MCCAA Individual Wrestling Championship.

What winning the tournament does do is serve notice to the rest of the conference that the Roadrunner wrestling team is back and ready to return to its place as one of the top junior college wrestling teams in the State of Michigan.

“We talk about it all the time in the room,” Hesson said. “Four months ago, we didn’t know most of these kids, other than taking them on a tour or a visit. Some of them you know, but most of them you don’t. It has been a very nice week. I was very excited and proud of their enthusiasm and excitement.”

Hesson believes that their success Saturday was a carryover from Wednesday when SMC hosted the inaugural Black & Blue on the Mat wrestling match between rival Dowagiac and Niles.

“I couldn’t have been more perfectly timed,” he said. “Because the enthusiasm that was going on Wednesday was same kind of enthusiasm we had on Saturday. It was kind of like getting back to like a good old-fashioned high school dual. Sometimes college wrestling is slow and methodical.”

The Roadrunners will now take a month off to rest up both physically and mentally before returning to the mat Jan. 15 at the St. Claire County Community College Duals.