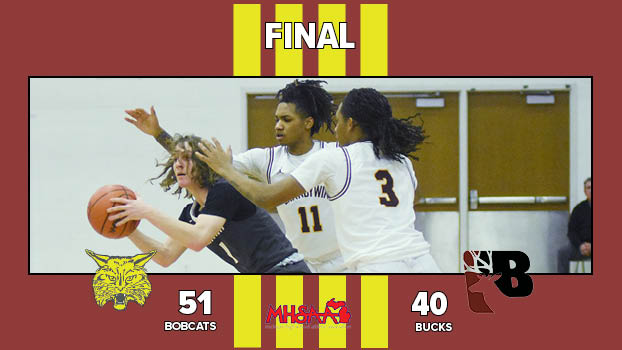 Brandywine (4-0) got out to a quick lead, but found themselves trailing 11-10 at the end of the first quarter. Jaremiah Palmer scored five of his team-high 14 points in the frame. He also had five rebounds, three assists, three steals and block.

“It was definitely a hostile environment tonight,” said Brandywine Coach Nathan Knapp. “With it being a rivalry game, we talked about how the game would be up and down and to keep our composure.”

The Bobcats forced seven Buchanan (2-2) turnovers and held them to six points in the second quarter. The Bucks wouldn’t get any closer the rest of the game as it fell behind 23-17 at halftime.

Michael Palmer had three of his nine points in the quarter, as well as nine rebounds and two assists.

“I don’t think the turnovers killed us that much,” said Buchanan Coach Reid McBeth. “I felt our transition gave them too many baskets. We had some mental lapses that kept us from winning the game. Overall, it was a great basketball game, and I was happy with our kid’s effort tonight.”

Brandywine continued to apply the pressure early in the third quarter and forced a quick timeout after Byran Linley and Jaremiah Palmer had early steals.  The Bobcats forced five more turnovers and doubled the lead to 12 at the end of the third quarter. The Bucks had 21 turnovers on the night.

Jamier Palmer lead all scores with four points in the third quarter. He would complete his night with six points, three rebounds and two steals.

In the fourth quarter, Buchanan showed some life behind Thomas Van Overberghe and at one point cut the Bobcats’ lead to eight points. However, Brandywine was able to make 5-of-6 from free throws to close the game out. The Bobcats before then were 7-for-21 from the line.

“I felt at the end we got a little shaky towards the end,” Knapp said. “But we did a good job closing it out and I was proud of how continued to attack the basket.”

“We don’t have a lot of depth,” McBeth commented. “But Brian Proud earned some minutes tonight with his play.  He won’t show up in the score book, but his defense was outstanding, and he communicated well.”

Van Overberghe had a game-high 16 points (eight in the fourth quarter) along with six rebounds and a steal.

Buchanan’s Cade Preissing flashed his passing skills with five assists, and although he only finished with one point, could have had double digit points if his shots had fallen.

“He [Preissing] spent a lot of time in the weightroom in the offseason and that has helped him,” said McBeth. “He just had one of those nights where he had some easy shots and they just weren’t going in.”

Brandywine outrebounded Buchanan 34-25, including 11-8 on the offensive end.

Buchanan will travel to Constantine tonight and have the final home game of the 2022 year on Wednesday against White Pigeon.

Brandywine will travel to Lake Michigan Catholic on Tuesday night and host Bridgman in between Christmas and New Years on Dec. 29.