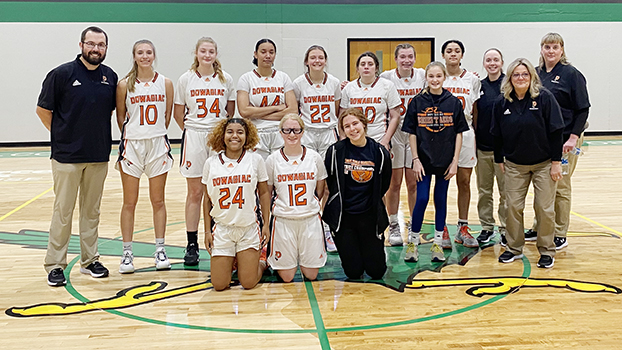 The Dowagiac girls basketball team squared its record at 3-3 with a win over South Bend Riley at the SMC Tri-State Holiday Classic Saturday. (Submitted photo)

Michigan was 2-3 against two schools from Indiana and another from Illinois in the showcase at the 1st Source Bank Fieldhouse.

Riley went 1-1 as it knocked off Niles in the opening game of the classic, 43-29. In the final game, Elkhart defeated Edwardsburg 66-52. Hazel Crest defeated Lawton 36-19.

The Chieftains (3-3) held the Wildcats to nine points in the first half as they built up a 21-9 halftime advantage. Dowagiac would outscored Riley 25-8 in the second half to earn the easy victory.

“Tonight, the second half was much better and we were able to convert on our steals and fast break layups,” said Dowagiac Coach Jason Turner. “We did great defensively and played well together in the second half. It was great to have the opportunity of playing at SMC and we are very thankful for the opportunity they gave us.”

Kaytlin Smith had 10 points for the Wildcats.

The Wildcats double up the Vikings 26-13 by halftime and went on to defeat Niles, which dropped to 0-6 on the season.

A slow start doomed the Eddies, who were playing their second game in 24 hours.

Elkhart jumped out to a 20-9 lead after one quarter and never looked back.

Shaniyah Hughes had a game-high 19 points for Elkhart, which also got 18 points from Sam Stout.