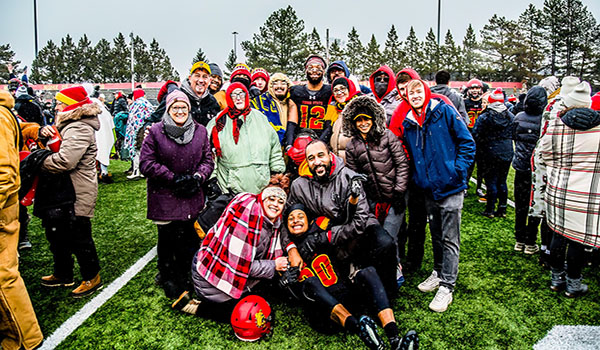 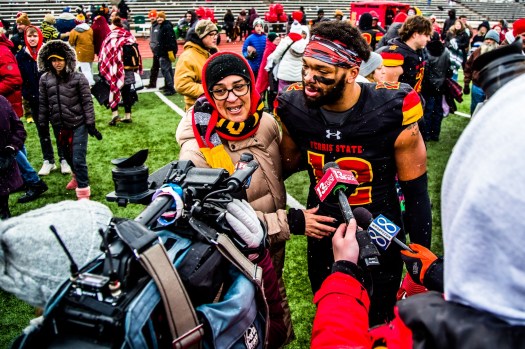 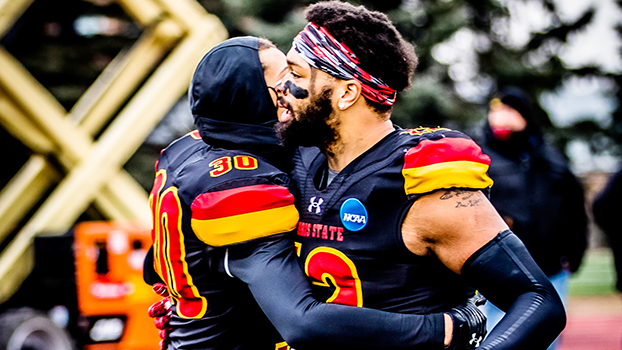 BIG RAPIDS — It was a family affair for Dowagiac natives Caleb and Cailyn Murphy Saturday afternoon at Ferris State University.

Fresh off the Bulldogs’ 38-17 victory over West Florida in the NCAA Division II Football National Semifinal game, the brothers Murphy were greeted by their mother, Tamantha, and a host of friends and family members who made the 2.5-hour trip from Dowagiac to Big Rapids to see them play in their final home game of the season.

Caleb shared a heartfelt embrace with his mother after helping the Bulldogs advance to their second-straight Division II National Championship Game taking place at 1 p.m. Saturday, Dec. 17 at McKinney, Texas.

“I’m super proud; he’s an amazing human being,” Tamantha said. “He does the right thing; he thinks of others and he’s not selfish. I’m super proud of all of his accomplishments. He’s a college graduate, that’s most important.”

“My mom is my best friend,” Caleb said. “I would do anything for her just to make her happy. It makes me happy.”

According to Caleb, his mother will be making the trip to McKinney to see her sons play for a second-straight national championship.
“We do everything together,” he said. “She means the world to me. I can count on her for anything and everything.”

Caleb has compiled an impressive resume since transferring to Ferris State from Grand Valley State two years ago. Along with being on the list for the Ted Hendricks Award, the 2022 GLIAC Player of The Year award winner is also a national finalist for the 2022 Gene Upshaw Division II Lineman of the Year honor and is a 2022 Harlon Hill Trophy nominee.

He continued his All-American level play Saturday afternoon, notching another sack and forcing a game-changing fumble that was recovered by Ferris State, which resulted in a touchdown on offense. For Caleb, who is used to teams double and triple-teaming him, the attention they choose to give is of no concern to him.

“It makes me happy when teams slide just for the simple fact that we have some dogs on the defensive line,” he said. “Everybody can win. If they slide to me, that gives other guys easy one-on-ones or they’re one-on-one with the tight end or something like that, so it’s just freebies for them.”

For Caleb, one of his greatest joys this season has been the ability to play with his younger brother, Cailyn, for the second straight year. A redshirt freshman wide receiver, Cailyn has appeared in four games and has caught one pass for six yards and two rushes for 18 yards.

“It’s pretty cool that my brother is playing this year,” Caleb said. “Last year he didn’t play; he still got a ring because he helped the team out in any way possible and it’s awesome that we get to experience that together.”

“It feels great to be able to play again with my brother for one more game,” Cailyn said. “It will probably be the last one we ever play together, so it’s just amazing.”

For Cailyn, being able to interact with his brother on the same team has been an experience he won’t soon forget. The two brothers had never been able to be on the same team prior to Caleb’s arrival in Big Rapids.

“It’s more than words could ever explain,” Cailyn said. “His career has been amazing since he came here and I’m very proud of him. I just can’t thank God enough for the opportunity he’s given us.”

A former Dowagiac standout at quarterback, Cailyn has made the transition to wide receiver since enrolling at Ferris State. His combination of size (6-3) and speed makes him an ideal fit in the Bulldogs’ offense.

“I’m playing a new position now,” Cailyn said. “It feels great to be able to have the ball and be capable of showing my abilities in many different ways.”

Next week’s game could be Caleb’s last in a Bulldog uniform. The redshirt junior has garnered significant NFL attention, being compared to former Grand Valley State standout and current New England Patriot Matthew Judon. No matter what his decision will be, Caleb is determined to bring back a second straight national championship to Big Rapids.

“You come here to win,” he said. “It’s the ultimate goal every year. It’s right there; if we do what we gotta do and we’ll be back.”

Cailyn hopes that his success and his brother’s success sends a positive message to the Dowagiac youth back home.

“I’m trying to send the message of telling kids to not give up on their goals anymore,” he said. “It seems like kids are starting to fall apart and I hope that seeing me and Caleb going back to the championship helps out.”