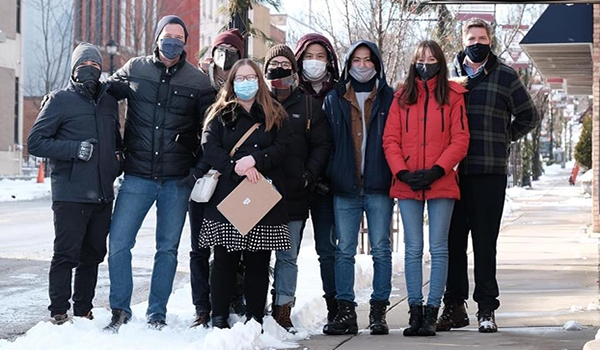 BUCHANAN — The community project, A Vision for Buchanan, which has been turning heads in the development world over the last year was awarded the prestigious national award by the Urban Guild for Student Work in an awards presentation ceremony on Wednesday.

The Vision was created throughout a six-month partnership between the City of Buchanan and Andrews University School of Architecture and Design. The Urban Design Studio of 5th Year Architectural students under the leadership of Professor Andrew von Maur challenged the community to reimagine development opportunities in Buchanan. Several of the recommendations are already in the implementation stage.

“On my first day in Buchanan, I sat down at my new desk and began making calls to colleagues letting them know where I landed. My first call was to Professor Andrew von Maur of Andrews University with whom I worked in 2007 on a project called The North End Plan, which drove transformational change in Michigan City. I asked him to put me on his radar with his urban design studio for a project in Buchanan. To my surprise he called me back and said, ‘We may have a project.'”

He explained that a long-anticipated project overseas had been cancelled due to COVID.

Professor von Maur and Murphy quickly realized that an equally relevant and compelling opportunity existed right here in the small town of Buchanan, Michigan, just down the street from Andrews University and in its own backyard. The script was writing itself. Buchanan was a small town asking big questions.

A Vision for Buchanan was a community wide effort led by the Buchanan City Commission. The steering committee led by Mayor Sean Denison and City Manager Heather Grace worked alongside the students and the community. The process challenged stakeholders to think in ways that highlight Buchanan’s unique strengths while remaining true to its community identity. Central themes include placemaking, pedestrian-oriented design, family friendliness, historic preservation and inclusive economic development.

The ultimate goal of the project is to provide a roadmap for the next wave of revitalization in Buchanan. It is also a celebration of the future of the city and a tool for city leaders to facilitate implementation in the marketplace

“Working with these students was an awesome experience,” Dennison said. “It was a joy to work with the community to produce this exceptional work product. The City of Buchanan has stepped up to the challenge of forging a vision for the future. I am inspired and ready to continue our work on implementation.”

The Vision is meant to be practical and to immediately take action on implementation. It is a menu of possibilities that can happen in Buchanan. Many of the projects are already underway in Buchanan. The project can be accessed in its entirety at https://www.nicestplacetowalk.com/

von Maur praised the work of his students on Wednesday.

“This is a talented group of students who has a done a deep dive into Buchanan in order to forge a consensus on community priorities and redevelopment opportunities,” von Maur said. “Big questions were asked by a small town throughout this project. How can Buchanan be better for the next generation? How can Buchanan grow and become a stronger community? How can Buchanan compete in the marketplace with its compelling self of self in order to create jobs, invite more businesses and residents to choose Buchanan?”

The Andrews University student team includes Ronesto Pineda, Juston Foote, Joel Soto, Jaysung Choi, Reu Avellona. and Ornella Gregorotti. Ronesto Pineda summed up well the benefits of the project for both the students and the City.

“Working with Buchanan has been a riveting experience. It was eye opening to see the passion that these citizens have for their small town, and it makes me excited for the future of Buchanan and my future career as an architect.”

This isn’t the first time that Murphy and von Maur have partnered on a student project that reeled in a national award. In 2007, they collaborated on The North End Plan of Michigan City that won a charter award for the Congress for the New Urbanism.

“The plan didn’t sit on a shelf,” Murphy said.

In fact, most or all of the recommendations were implemented including regionally transformational projects. The work from The North End Plan laid the foundation to the $600 Million Double Track Northwest Indiana that is currently under construction that will create a 66-minute South Shore Line commute time from downtown Michigan City to downtown Chicago.

Residents of Buchanan and potential new residents and investors are encouraged to visit the A Vision for Buchanan website that the Andrews University students created at https://www.nicestplacetowalk.com/ where they can see the illustrative concepts put forth by the community and have a direct avenue of communication to express their feedback to the City. The website is also intended to be an economic development tool to direct potential investors to City resources including Community Development Director, Richard Murphy, who is the conduit to the city leadership to direct the implementation effort.

“We are excited by the amount of interest that this project has generated for the City of Buchanan,” Murphy said.

Murphy emphasized that the project is a work in progress but that the concepts put forward are the result of community consensus from a broad diversity of voices.

“A Vision for Buchanan is a menu of redevelopment opportunities that the community can prioritize and go after,” he said. “Things aren’t going to happen overnight. But the fact that we have community consensus behind feasible concepts puts us in a more redevelopment ready position and allows us to begin to seek state and local partnerships and grants to get projects off the ground. We are excited that this excellent work product has been recognized on the national level.”

The Urban Guild Awards program celebrates projects that exemplify the Guild’s unique mission of respecting the wisdom of the principles of architecture and urbanism that have succeeded over time, and collaboration for the continued innovation and advancement of the principles, techniques and tools for great design. The Guild awards exist to increase public awareness of this approach to design and works are designated in three distinct categories: Design Excellence, Design Exploration, and Student Work. Learn more about the Urban Guild at https://www.urbanguild.org/