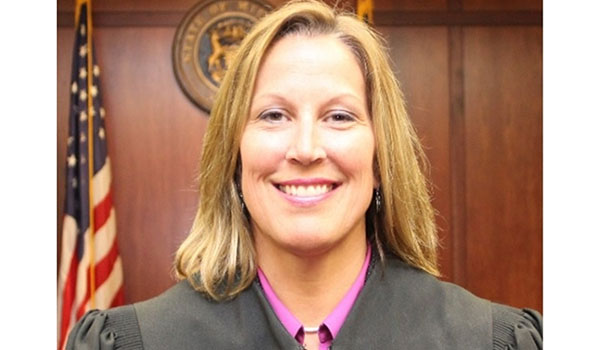 ST. JOSEPH — 2023 will bring a new judge to Berrien County Trial Court and also a new judge assigned to the South County Courthouse in Niles. In addition, leadership changes are coming to the Berrien County Public Defender Office.

Berrien County Trial Judge Jennifer Smith has been assigned to the Niles courthouse after spending the last four years assigned to the St. Joseph courthouse. She was appointed to the bench in the fall of 2018 after Judge Scott Schofield’s retirement.

Smith is a native of Chelsea, Mich. on the east side of the state and is a double graduate of Wayne State University. She earned her bachelor’s degree in 1993 and her law degree in 1996. She started in the Berrien County Prosecutor’s Office in 1997 as an assistant prosecuting attorney and served as the chief assistant prosecutor 2013-18.

In an interview in 2018, she said she gained insight into the life of a judge by watching the judges of Berrien County over the years, including the years when she was primarily assigned to Judge Schofield’s courtroom. “Some are faster, others are slower, they have different demeanors and deal differently with courtroom decorum,” she said.

“It’s exciting, it’s a totally new adventure,” she added at the time. “People always ask you if you want to be a judge some day and I never really thought of it until the last few years. I have a lot of respect for the judiciary and I see this as another way I can contribute.”

Judge Sterling Schrock has been the judge for the Niles court since early 2020 and will now return to the St. Joseph courthouse where he has assigned to the Trial Court’s Family Division. Judge Donna Howard has been named the presiding judge of that division starting in January.

Trial Court Administrator Carrie Smietanka-Haney said new judicial assignments have been made for the Berrien Trial Court and will be memorialized in an administrative order to be posted closer at the end of the month.

Judge Brian Berger will be the presiding judge in the Trial Court’s Family Division. Other judges in that division are Judge Gordon Hosbein and Judge Mayfield.

Jancha has headed the Berrien County Public Defender Office since March, 2020. He was elected to a six year term on the bench in November, running unopposed. The seat was available after Judge Dennis Wiley did not run again due to age limitations.

“Serving as Berrien County’s Chief Public Defender has been the most rewarding and challenging experience of my career,” Jancha said last week. “… I have sought over this time to build upon the work of my predecessors and develop a more holistic, client-centered office.”

“From my time as a defense attorney and Chief Public Defender, I bring a desire and ability to support the court as it seeks always to improve its service to our community, to listen with an open mind to all sides of an issue, and to see the humanity in all aspects of the judicial process,” he said.

Commissioners appointed Kaitlin Locke to head the Berrien County Public Defender Office on an interim basis as the search takes place for a permanent replacement for Jancha. Locke is currently the Chief Assistant Public Defender.

Commissioners said Locke has “exhibited a superior level of leadership and experience” and is qualified to perform the job on an interim basis. Locke’s appointment is for 90 days as the search takes place for someone to fill the post on a permanent basis.

Her appointment can be renewed by the county board if no one is found in that time period. Her salary will be $107,326. She has been an attorney in the office since 2017 and the chief assistant public defender since earlier this year.