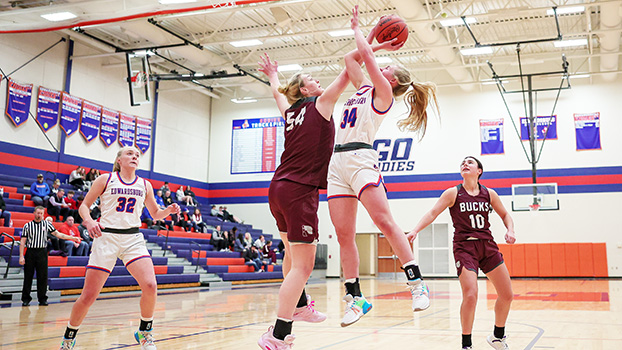 The MHSAA has added two games to the girls and boys basketball schedules, as well as changed the weight classes for wrestling this season. (Leader file photo)

EAST LANSING — The addition of two games to basketball regular-season schedules and a new series of wrestling weight classes are likely the most noticeable Winter 2022-23 changes as an estimated 65,000 athletes statewide take part in 13 sports for which the Michigan High School Athletic Association sponsors postseason tournaments.

A variety of changes are in effect for winter sports this season, including a several that will be noteworthy and noticeable to teams and spectators alike.

Basketball remains the most-participated winter sport for MHSAA member schools with 33,000 athletes taking part last season, and for the first time, basketball teams may play up to 22 regular-season games. This increase from the previous 20-game schedule allows more games for teams at every high school level – varsity, junior varsity and freshman.

A series of notable changes will affect how competition takes place at the MHSAA tournament levels.

Bowling will see an MHSAA Tournament change, as the team regional format will mirror the long-standing team final with teams playing eight Baker games and two regular games at both levels.  And as also applied during the fall girls season, there is a new qualification process for divers seeking to advance to Lower Peninsula Boys Swimming & Diving Finals. In each of the three divisions, each Regional will be guaranteed 10 qualifiers for the Finals, with six more “floating” qualifier entries to be distributed to the Regionals that have one of the previous year’s top six returning Finals divers in their fields. If a team changes division from the previous season, any floating top-six spots are added to the six already allowed in the school’s new division.

In competitive cheer, the penalty for going over the time limit in each round was adjusted to one penalty point for every second over the time limit, not to exceed 15 points. The new time limit rule is more lenient than the past penalty, which subtracted points based on ranges of time over the limit.

The 2022-23 Winter campaign culminates with postseason tournaments, as the championship schedule begins with the Upper Peninsula Girls & Boys Swimming & Diving Finals on Feb. 18 and wraps up with the Boys Basketball Finals on March 25. Here is a complete list of winter tournament dates: