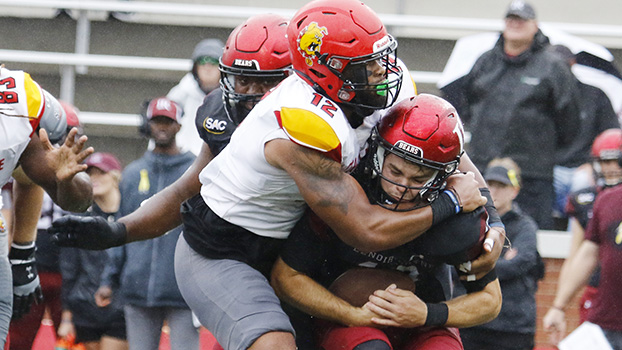 BIG RAPIDS — A pair of Harlon Hill Trophy finalists have been named to the American Football Coaches Association Division II All-America Team, which was released Monday.

The AFCA has selected an All-America team since 1945 and currently selects teams in all five of its divisions. What makes these teams so special is that they are the only ones chosen exclusively by the men who know the players the best — the coaches themselves.

Murphy, the only non-NCAA Division I player remaining as a top five finalist for the Ted Hendricks Award, set an all-divisions NCAA single-season record with 25.5 sacks in 2022. He leads the nation in tackles for loss with 37.5 and has added three forced fumbles. Murphy was named the 2022 Gene Upshaw Division II Lineman of the Year.

The Pennsylvania State Athletic Conference Offensive Player of the Year set the NCAA all-division record of career touchdown passes at 159 in Shepherd’s quarterfinal win over Indiana (Pennsylvania) on Dec. 3.