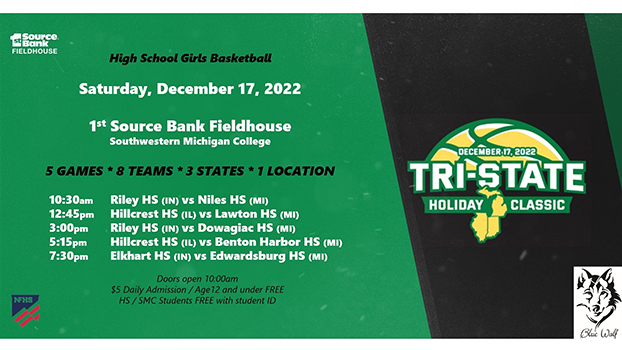 DOWAGIAC — Another quick start and another victory for the Southwestern Michigan College women’s basketball team.

The Roadrunners doubled up the Hawks, 26-13, in the opening quarter and never looked back. Southwestern Michigan led 32-26 at halftime and 52-38 heading into the final quarter.

The Roadrunners shot a sizzling 53 percent from 3-point range as they connected on 10-of-19 attempts, led by Cameron Thomas (Hazel Crest, Illinois) 6-of-9 shooting from beyond the arc. Thomas led all scorers with 27 points.

The Roadrunners’ defense forced Henry Ford into 30 percent shooting from the floor (21-of-71) and 19 turnovers.

The Roadrunners return to the court Dec. 19 when they travel to Perrysburg, Ohio to face Owens Community College, which is currently ranked No. 3 in the National Junior College Athletic Association Division III rankings. Owens Tech is the NJCAA Division III National Champions.

“I wanted our women’s basketball program to bring high school basketball to our campus from our surrounding communities to play out-of-state teams,” Women’s Basketball Head Coach Jeanine Wasielewski said. “Next year we’ll add the guys. There are no event management duties for the high schools, and the teams get to experience the fieldhouse’s college atmosphere. Coaches loved the idea of bringing their teams to campus, and we love the idea of giving back to our communities and their fans who sent us players,” including Niles and Edwardsburg.

“We definitely want to grow it,” perhaps to two days between Christmas and New Year’s in 2023 so players will be on holiday break. She said visitors from Indiana and Illinois are allowed to play twice, hence, the fifth game.

Riley, for example, will play both Dowagiac and Niles, while Hillcrest takes on Benton Harbor and Lawton.

Wasielewski started contacting teams nine months ago. “I want it to be competitive for them so I’ve tried to match them evenly. I’d love over time to get sponsors and provide entertainment, but we’re keeping it simple for the first one. I’m super excited that we’re pulling it off. My players are excited, too, to be hosting and volunteering.”

Doors open at 10 a.m. with $5 daily admission. Ages 12 and under are free. High school/SMC students are admitted free with student ID.