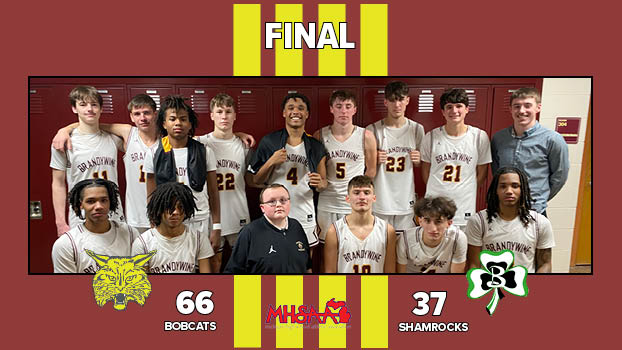 NILES — The Brandywine girls’ basketball team continued its excellent start to the 2022-23 season as it dismantled Berrien Springs 70-20 in Lakeland Conference action on Friday night.

Sophomore Adeline Gill scored nine of her game-high 19 points in the first quarter for the Bobcats, who led 21-6 at the end of the first quarter. She also finished with eight rebounds, five steals, and three assists.

Brandywine’s (3-0) suffocating full-court press defense forced turnover after turnover throughout the first half, and Berrien Springs (2-3) couldn’t find an answer. It quickly found themselves 42-10 at halftime.

“The pace was really good tonight,” said Brandywine Coach Josh Hood. “Our practices are not easy, and we try to simulate game speed for a Friday night. Our three and four girl rotations throughout the game works and allows us to allow playing time for everyone. The expectation every game is for the ladies to bust their butt and they did a good job of that tonight.”

Kadence Brumitt and Miley Young also had double figures in points with 14 and 10, respectively.

The Bobcats forced over 30 turnovers and had 22 steals for the game. They outrebounded the  Shamrocks 33-21 (15-4 on offensive rebounds).

“This group has a chance to be one of the best teams I have had in my 14 years here,” Hood commented. “They are young and have all the potential in the world to be special. All our ladies can shoot the ball and are unselfish. Basketball has gotten a lot better in the area over the past couple of years. We are playing two top ten teams next week.”

Brandywine was without all-state guard Ellie Knapp and all-conference guard Ireland Prenkert for this game. Hood is hopeful to have Prenkert ready for next weeks’ clashes against Bronson (12/13) and at Buchanan (12/15), while Knapp will not be available for action until January.

Palmer was one of four Bobcats in double figures. Twin brother Jamier Palmer and Nylen Goins had 11 points, while Byran Linley had 10 points.

Brandywine (2-0) struggled early, but found itself with a 10-6 lead heading into the second quarter.

Berrien Springs (1-1) had four straight scoreless possessions to start the second quarter, which Brandywine took advantage of and took a 17-6 lead. From there the Bobcats never looked back.

“Our basketball IQ wasn’t there early,” said Brandywine Coach Nathan Knapp. “I’m not sure if it was because of the home opener, but we stepped it up in the second half. We gambled on getting steals and when we were successful you can see what happened. The refs let us play a little bit tonight and I’m proud of how the guys played.”

The Bobcat crowd got a taste of freshman Goins in the first half. He scored eight of his 11 points, including two 3-pointers, which helped light the spark. He also had a pair of steals on the night.

“He brings a little fire to the team,” Knapp said on Goins performance. “He worked really hard in the offseason to get to this moment and loves the game. He still makes the freshman mistakes but his poise to play at the level helps the team out.”

Brandywine used 11 of the 23 Berrien Springs turnovers to pull away in the second half.

Brandywine will travel to Bronson Tuesday night and then to Buchanan on Friday night for a Lakeland Conference contest.