Murphy one of five finalists for Hendricks Award 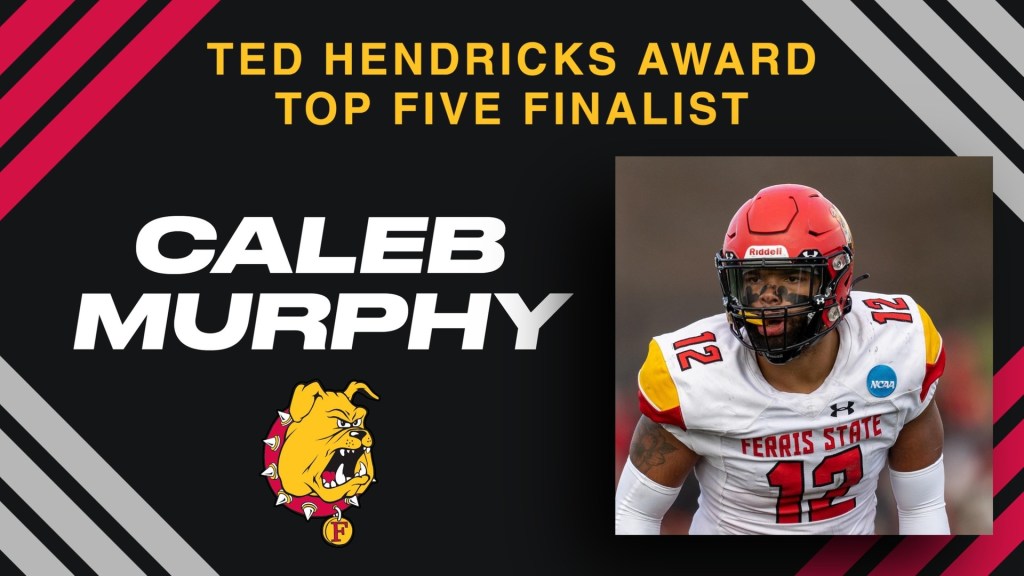 BIG RAPIDS — Standout defensive end Caleb Murphy of Ferris State University has been tabbed as a top five national finalist for the 2022 Ted Hendricks Award, which is presented to the top defensive end in all of college football.

Murphy, who was previously named to the final national watch list for the 2022 edition of the Ted Hendricks Award last week, advanced to the final round of balloting and is among the top five finalists remaining under consideration for the award.

The Bulldog standout is the only non-NCAA Division I player remaining as a top five finalist and joins Kansas State’s Felix Anudike-Uzomah, Isaiah Foskey of Notre Dame, Eastern Michigan’s Jose Ramirez and Southern Cal’s Tuli Tuipulotu in the group of five. The final vote will be tallied on Dec. 12 with the winner of the prestigious honor slated to be named on Dec. 14 by the Ted Hendricks Foundation.

Murphy, of Dowagiac, has had a dominant season for the defending NCAA Division II National Champion Bulldogs. He currently leads the nation in total sacks (24.5) along with tackles for loss (36.0) this year. In addition, he has forced a pair of fumbles while playing a pivotal role on one of the nation’s top defensive units.

Earlier this week, Murphy was chosen as the Gene Upshaw Division II Lineman of the Year and also tabbed as the Super Region Three Defensive Player of the Year. Murphy has set an all-time NCAA single-season record for sacks with 24.5 this year, which ranks as the most for any player in the history of college football in a single season at the NCAA level. He also broke the school marks for both most sacks and tackles for loss in a campaign.

Additionally, Murphy is also one of nine national finalists for the 2022 Harlon Hill Trophy as the NCAA Division II Player of the Year.

This week, the Bulldogs will host West Florida in the 2022 NCAA D2 National Semifinals on Saturday (Dec. 10) at Top Taggart Field. Kickoff is set for 12:02 p.m., with the game slated to be carried live by ESPN+.

The winner advances to the D2 National Championship game on Dec. 17 in McKinney, Texas.