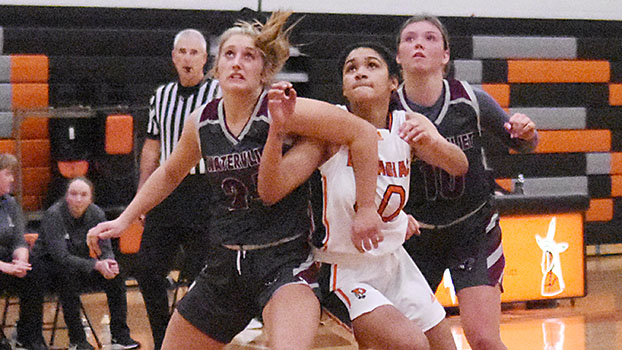 The Chieftains shutout Decatur in the second and third quarters on their way to a 39-11 victory. The win improved Dowagiac to 1-2 on the season, while the Raiders fell to 0-2.

“Tonight, we got the win because of our defensive effort,” said Dowagiac Coach Jason Turner. “We did not have an all-around great night offensively especially shooting. Our defense lead to our offense. We pushed the ball up the court and ran the court really well. Especially the second half.”

Dowagiac led just 9-8 after one quarter, but outscored Decatur 9-0 in the second quarter and 14-0 in the third quarter to open up a 32-8 lead heading into the final eight minutes of play.

“We had a great night on the boards from Alanah and Audrey,” Turner said. “It was great to get our first win of the year under us.”

Abby Baushke had six points to lead the Raiders.

Dowagiac returns to action Tuesday when it travels to Three Oaks to face River Valley in a non-conference contest.

The Rangers squared their overall record to 1-1 as it won its Southwestern 10 Conference opener at Hartford Tuesday night.

Cassopolis  trailed 10-8 after one quarter, but rebounded to take a 22-12 halftime lead. The Rangers increased their lead to 13 points (30-17) through three quarters.

Cassopolis is back on the court Friday as it hosts Centreville in another Southwest 10 Conference contest.