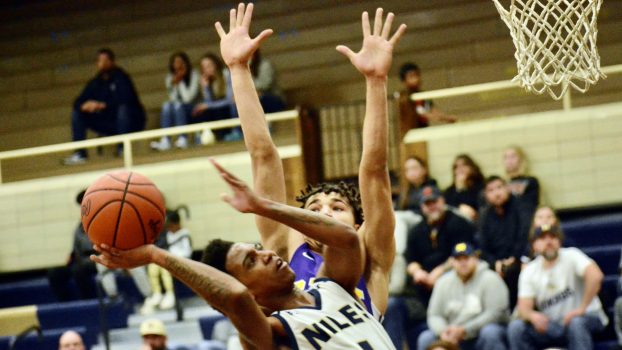 The Colonials pulled away in the fourth quarter to best the Vikings 74-54 in a non-conference showdown.

A close game through three quarters, Clay outscored Niles 29-19 in the final  quarter. The Colonials led 31-26 at halftime and by as many as 21 points in the game.

The Vikings struggled hitting outside shots and boxing out. The Colonials attacked the glass for offensive rebounds, which led to second chance points.

“The biggest thing is we got to get tougher,” said Niles Coach Myles Busby. “They out-rebounded us by a lot. I think they played exceptionally well. We obviously made some mistakes; defensively, we gotta tighten some things up, rebounding. We had a very short bench with a lot of young guys.”

Clay, a member of the Indiana High School Athletic Association, played its fourth game of the season, improving to 3-1. In Michigan, the first games of the season were played Monday and Tuesdayy.

“We don’t have a lot of practice time; the MHSAA does us no favors by a week of practice before our first game,” Busby said. ”We played an Indiana school who’s played four games already. It was very tough for us but I liked the way we played.”

Busby was impressed with the play of freshmen Talen Bennett and Acie Kirtdoll.

“Some positives were (Bennett) coming up and his first game on varsity playing well for he said. “He got some offensive rebounds, just some hustle plays in there and (Kirtdoll) hit a big shot. He’s a freshman, he’s gonna play a lot of minutes for us. He’s gonna be big for us later in his career.”

While he would have liked to see his team start the season with a win, Busby is confident his team will play better as the season progresses. The Vikings host Wolverine Conference foe Otsego at 7:15 p.m. Friday.

“We won’t have too many games like this where (Brady) only goes ‘three-for-12’ from three or (Johnson) can’t make a layup. It’s all kind of just working out the first-game jitters, but I’m confident; I like this team a lot. We’ll be a lot better in mid January,” Busby said.