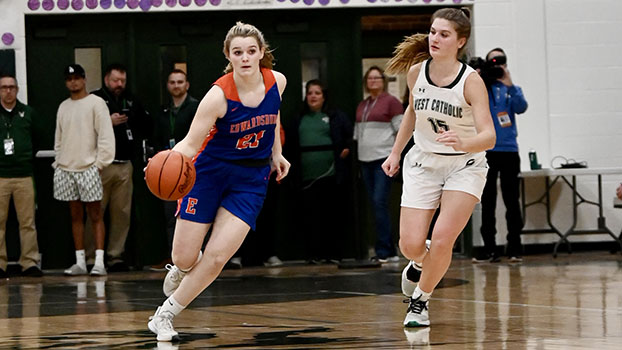 Averie Markel and Abby Bossler combined for 11 of the 13 points to help the Eddies to the win. Markel finished with a game-high 25 points, while Bossler added 13 points.

The Eddies dominated the second half as it poured in 32 points compared to 24 for the Lancers.

“It’s always great to start the season with a win,” said Edwardsburg Coach Jon Pobuda. “We had a lot of ups and downs during the course of the game, but was able to do just enough to hang on against a good young Lakeshore team at their place.”

Besides Markel and Bossler, the Eddies got 10 points from Caitlin Tighe. Markel finished the night with five rebounds, four steals and a pair of assists, while Bossler had six rebounds. Tighe had a team-high eight steals to go along with three assists and four rebounds.

Pobuda was pleased with his team’s effort as it tries to replace Ella Castelucci, Macey Laubach and Katie Schaible, who led the Eddies to the Division 2 state quarterfinals last season.

“We are asking girls to step in and fill different roles than they had last year so it’s going to be a process for us,” he said. “There is a lot to still figure out, but I really like this group. They play hard for 32 minutes no matter who’s on the floor.”

The Eddies are back on the road Friday night as they travel to Plainwell for a Wolverine Conference contest.