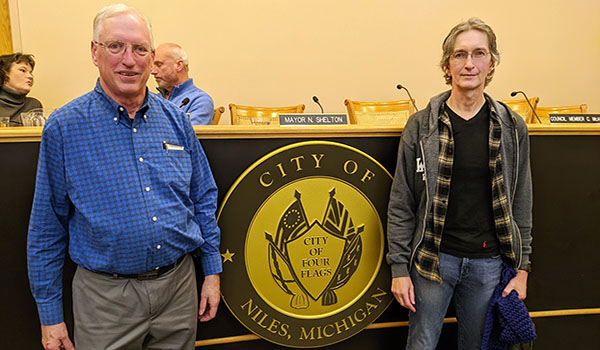 Tim Rogers and Michael Thompson were sworn-in as first time members of council during Monday’s meeting at the Niles Fire Department.

Incumbents Gretchen Bertschy and William Weimer were also sworn in for their new terms.

Rogers and Thompson ran as write-ins in the Nov. 8 general election. Thompson defeated Joel Edward Rogers 7-6 in the Ward 4 race. Rogers was the lone qualified participant in Ward 2.

The duo replaced Travis Timm and Jessica Nelson, who decided not run for a second term.

“I’d like to welcome our two new council members and congratulate them,” said Councilmember John DiCostanzo. “I look forward to working with them going forward.”

Born in the Democratic Republic of Congo, Thompson’s family ties to the area brought him to Niles. He entered the United States Marine Corps at the age of 17 and moved back to Niles after serving.

“No tornadoes, I have family support, there’s no reason to go anywhere else, right?” he said.

Thompson, who represents the city’s fourth ward, was inspired to run for election to work with the city council to increase liberty and reduce the workload of city employees.

Like Thompson, Rogers has long familial ties to the community that brought him back to The City of Four Flags. A retired firefighter/paramedic, Rogers lived and worked in Texas for 36 years and moved back to Niles four years ago to be closer to his parents.

Having worked in city government for more than three decades, Rogers saw the council as an opportunity to contribute to the community.

“I’m not a politician,” he said. “I’m in it,  if nothing else, to try to make sure that the folks that are here can communicate with the folks in the city to let them know what’s going on. I’m on Facebook. I watch the running comments about South 11th Street; all you’ve got to do is look at Facebook around Niles and see it. The message isn’t out there of why things are the way they are. That’s just an example of the communication not being there and I want to try to help with that.”