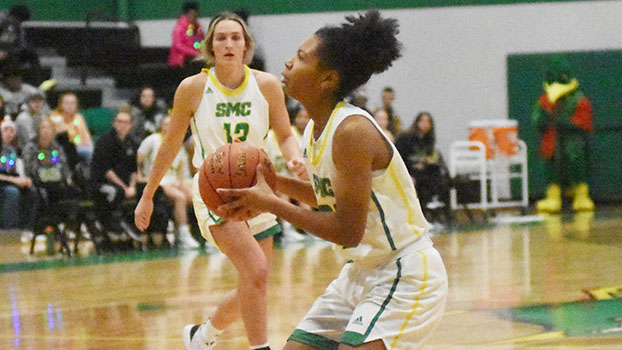 Picked to tie for second is Glen Oaks Community College with second year coach Robbie Hattan at the helm. The Vikings finished last year was 8-20, 6-12 and end up in sixth place. They lost in the first round of the NJCAA Great Lakes District A Tournament. Glen Oaks CC picked up on first place vote.

Also picked to finish second in the MCCAA Western Conference is Kalamazoo Valley Community College. The Cougars finished tied for seventh last season with a 5-18, 5-13 record.

Picked to finish fourth in the Western Conference is Lansing Community College. The Stars finished ninth last season with a 6-22 overall record and 4-14 conference mark. Lansing picked up a first-place vote.
Returning to the MCCAA after 26-year hiatus, the Roadrunners of Southwestern Michigan College are picked ot finish fifth in the Western Conference. The Roadrunners, who will be led by Jeanine Wasielewski, picked up the last first place vote.
Picked to finish sixth is Marian University’s Ancilla College. The Chargers tied for seventh last season with a record of 9-15, 5-13. They fell in the first round of the NJCAA Great Lakes District A Tournament. Ryan Gould takes the helm this year for the Chargers.
Finally, picked to finish seventh is Kellogg Community College. Tbe Bruins finished last in the Western Conference last year with a 1-23 overall and 1-17 conference mark. New coach Sal Konkle will look to move the Bruins up the standings this season